A Father’s Day Idea, Highlights from the International Reading Association Conference, and Chicks! 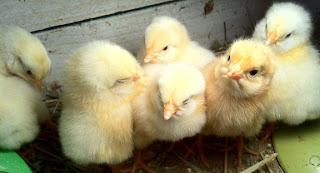 This week I have been trying to refocus and get myself back into the swing of things, because for us, Open House was just this Thursday, May 19th!!  Yikes!  Then comes all of the end of the year assessments and report cards to take care of, as well as placement cards for next year.  AND, my class is now rehearsing for our end of the year play, which will be a performance of the Wide Mouthed Frog on June 2.  Our last day of school is on June 9th.  I know that this is pretty late in comparison to many of you!  Spending a week in Orlando only gave me a taste, and now I am more than ready for summer.  Aren’t we all? But for now, having 28 kids in the class is really weighing on me now at this time of year when assessments and report cards are coming due.  And trying to catch up on teaching and testing the ones that arrive very late in the school year is of course, the most difficult part of all.  My 28th student arrived at the very end of April! 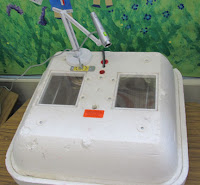 Our chicks hatched this week!  We had seven hatch of the ten eggs, and six survived.  I managed to move my incubator over so that it could be near enough to the document camera  to project what was happening inside of it on the screen, so we all got to see the first chick hatch live!  It must have been divine intervention, because when I arrived in the morning, one of the chicks was just beginning to make a little hole in the shell, so I put the document camera on top of the incubator.  By the time the children came inside, he had a slightly bigger crack in the shell, and it was clear that he was determined to hatch! 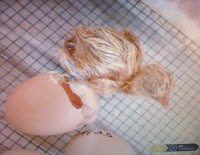 So I invited the class next door to come in and watch, and ten minutes later, we had a newly hatched chick!  The children were absolutely enthralled!  Then we all sang Happy Birthday to the chicky.  It was a priceless moment, and made all of the work that I had been through to make it happen worthwhile.  One thing that helped a lot was the digital hygrometer that I bought to measure the humidity.  I found out that the humidity makes a huge difference in the incubator when it comes to hatching, because if the air inside is not at very moist, the chicks have a very hard time making it out of their shells; it makes it harder to break through the membrane!  So while they are developing, they need the humidity to be at about 58%, and then for the last three days, you have to raise it up to 65%.  This is the first time I have done this.  Also, I didn’t realize that it is important to have the thermometer sitting at the level of the TOP of the eggs, not laying on the bottom of the incubator.  I discovered that even though you are raising the thermometer up only a couple of inches, it makes a HUGE difference in the temperature reading on the thermometer!  So that meant I had to lower the temperature quite a bit to keep it at about 100 degrees. 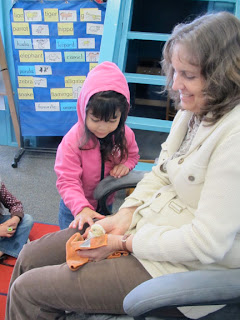 I also learned that if you keep the temperature slightly lower, your chicks will hatch a bit later, and if you raise it up a bit higher, your chicks will hatch a bit earlier.  My incubator was set at about 100.6 most of the time on my digital thermometer, and my chicks started hatching on the morning of the 21st day.  However, the teacher next door to me had her incubator at about 99.5 or even a bit less, and her chicks didn’t start hatching until the evening of the 22nd day!  She was convinced, at that point, that all of her chicks had for some reason died.  but this was not the case.  In fact, every single one of them hatched!  In the five Kindergarten classrooms at our school, we all followed these instructions.  One classroom had a malfunctioning incubator, and sadly, none of their eggs hatched.  It was brand new, but didn’t hold a steady temperature, so we are going to return it.  We gave that class a couple of chicks to have in their room, and told the children a little white lie:  “The chicks hatched overnight.”  They never knew the difference.

All of the other classes had a good hatch rate:  anywhere from 65 to 100%!  So I think we did pretty well!  Now all we have to do is find homes for all of those chickens!  But even if we don’t, there is a local feed and grain store that sells chicks, and they are always glad to take them if we don’t find them a home. 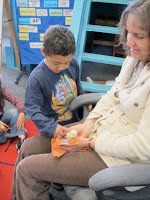 It was very sad when one of the hatchlings didn’t make it, but we just had to talk about the fact that not every single chick is going to make it.  Death, in fact, is a part of life.  It is sad, but it is what it is.  I removed the chick at lunch time and did not show the children the dead chick.  On the big screen, we had been watching him sleep and try to dry off after hatching overnight with his brothers and sisters.  Many of them were demanding to see him, but I refused, assuming that someone would be crying and go home incredibly upset, and then I would be dealing with the consequences of that.  But other than that, the chicks that we do have are adorable, and were a great “hit” on Open House! 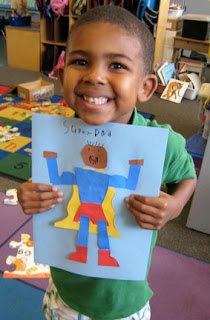 We have come full circle now since I started blogging more regularly, and around this time last year I posted a Father’s Day card idea made from a Zero the Hero pattern that is for sale on my website!   You can find the full write up here about how we did it last year, since we haven’t begun to think about Father’s Day in my classroom yet:  http://heidisongs.blogspot.com/2010/06/super-hero-fathers-day-cards.html.  The reason that I wanted to remind you all about this idea is because I have had several requests for a guided drawing project for a Father’s Day card to match the one I posted for Mother’s Day.  And given the busy week that I’ve had with Open House this week, there was no way I was going to be able to accomplish that task at the moment, in time for people to make use of it before the school year ends.  So I thought I would repost the project that I intend to do in June for Father’s Day.  It came out really cute and the children really enjoyed making them, and singing the Zero the Hero song to their Dads for Father’s Day!

3.  Handouts from the International Reading Association Conference
After my presentation was over at the IRA conference in Orlando last week, I spent some time online looking at all of the handouts that had been uploaded to their website (Link: http://www.aievolution.com/ira1001/index.cfm?do=cnt.page&pg=1021) from the other presenters.  I have to say that I was disappointed that there just wasn’t very much that had been uploaded!  But I went through the whole thing and found five handouts that I thought would be useful to you ( 1 2 3 4 5 ).  The first one was from a really great session that I went to on using e-books in the primary classroom, and their handout was FILLED with links to many other websites!  I would definitely check that out if you like to let children read books electronically.  Enjoy! 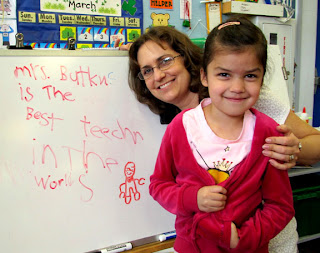 Each time I give a conference presentation, I try to put on a Power Point presentation in the room before I begin to keep people entertained as they wait for the session to start.  The slides forward themselves automatically, and I play some of my music while it runs.  Each slide has some of my favorite pictures of my students in action, and a little quote above it to read.  The quote is usually from an educational author, a fellow presenter I respect, or a famous person in history, but often they are just quoted anonymously.  I started collecting these quotes about a year ago with the intention of using them in a presentation one day, but not really knowing exactly how I would use them.  I guess this is just representative of my “teacher hoarder” tendencies!  When I find something on sale for a penny or a nickel each in August, I buy a class set of them, even if I don’t know what I am going to use them for!  But anyway, since I have started showing this “Quotes for Teachers,” I have been asked several times to post the quotes themselves on my blog, because the slides advance too fast for people to write them down to share with others.  So I am going to post a few of them for you here today and every few weeks over the summer.  I won’t be posting all of them at once, because I am now up to 73!  And I will surely keep collecting them.  If you know of a great one that you would like to pass along to add to the collection, I would love to know about it, so leave a comment on the blog, or post it on the HeidiSongs Facebook page!   Here are the first ten:

“To love what you do and feel that it matters — how could anything be more fun?”
-Katharine Graham, American publisher

“Music is what the heart expresses when there aren’t enough words.”
Anonymous

“The brain relies on the body, its senses, and movement in order to learn.  The brain is not a disconnected organ on legs.  Movement, and the application of what we have learned should be an ever present part of the learning process.”
Author Unknown

“If you want to tell people the truth, make them laugh.  Otherwise, they’ll kill you!”
Oscar Wilde

“Opportunity is missed by most people because it is dressed in overalls and looks like work.”  Thomas Edison

“Everything You Really Need to Know About Health, You Learned in Kindergarten!
1.  You can’t say you don’t like something until you’ve tried it.
2.  Not hungry?  Don’t eat!
3.  Go to bed on time.
4.  Don’t skip recess.  Get up and move during the day!
5.  Exercise like a child!  (Find a physical activity you love and do it as often as possible.)”
By Amanda Litvinov, NEA Magazine

Good teachers are not born.  They learn from the teacher next door!
Sheri Sutterley

“Teaching a child not to step on a caterpillar is as valuable to the child as it is to the caterpillar.”
Bradley Miller

“Teach your child to care for him or herself and take care of their own needs.  Excusing children from all responsibility leads to immature, spoiled, and incompetent adults.”
Author unknown