A Little Information About “The Gingerbread Man,” HeidiSongs’ Musical Play for Young Children 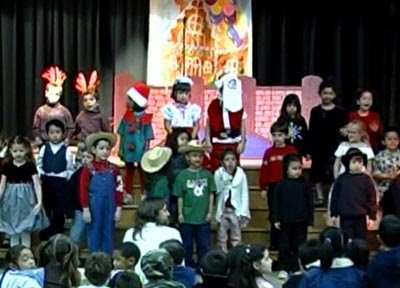 I often get asked, “ How long does it take to teach the kids the Gingerbread Man primary play?” I do always start teaching the songs at the beginning of November, and that leaves you plenty of time for the kids to learn the whole thing easily by Christmas. I like doing it this way because it allows me to work with them on the songs just a few days per week, so I can still use other songs to keep teaching in the content area meanwhile. My friends at my school have done the whole thing in just three weeks, and have been fine with it, but that is more pressure than I like to put on myself.

Do you need the DVD to learn the motions? Well, you could always make some up yourself. I don’t think that I did anything unusual with the handmotions at all. The DVD also has the kids putting on the play, so you can see how it all goes on the stage. It’s easier with the DVD than without, but certainly not impossible by any means! **UPDATE** Since we don’t sell the DVD anymore, you can watch the play on YouTube here!

As far as sets are concerned, we used a painted cardboard box the first year for an oven. It fell apart before the show ever went on and I had to make another, and that was a pain. The next year, a parent made me one out of wood. If you have a playhouse oven that is big enough for a child to fit in, then that will work, but you will have to deal with the probability that the kids in your class will spend the rest of the year climbing in and out of that oven during playtime!

I always use a table or teacher’s desk for the Gingerbread Man to climb up on as he sings his “Run, run” song. I cover it up with a bridge that has been made out of an unfolded and flattened cardboard box. I think that you can see what it looks like on my website if you look at the video clip from the show. A parent painted the box to look like a brick bridge going over a stream. I actually already had the bridge made from when we did the Three Nanny Goats Gruff from Millikin. So the Gman runs around and around the bridge/table, chased by whomever, and then finally climbs up on the bridge to be sort of “out of reach” of the chasing characters. The bridge can be folded up flat and stored in a closet. I also poked some holes into it and ran a piece of yarn through the holes to tie it onto the legs of the table. Otherwise, it falls down. The flaps of the box lay flat on the ground and look like water. The mom that made it for me volunteered to make it and had done similar things like it for her son’s pre-K play.

This is the CD cover for the soundtrack for the Gingerbread Man play from HeidiSongs.

Another thing I added as time went by is a backdrop of a Gingerbread Man house that was painted by another artistic mom. She actually painted it for me on a real painter’s canvas so that it would last a good long time. But this is nothing that you cannot do without. We also hang up some giant silvery snowflakes that hang from fishing wire above the stage. They sparkle and glitter a lot, and that makes the whole thing pretty. But again, it’s nothing that you can’t do without. We got them from Target after their Christmas season ended. They were just hanging up, and we asked if we could have them when they were done. They said that it would be no problem, and called us when they were finished with them. I’ve used them ever since.

Costumes are mostly just sweatpants died to whatever color you need, if necessary. We add a sock tail and a hat of some type, usually made out of felt. The Gingerbread Man’s outfit is a white sweat suit died a cinnamon color, with red pompoms pinned on the front. A Santa cap makes it cute. We had some red rickrack that we had glued onto the suit at the wrists and ankles, but it fell off, so a mom sewed it back on. The fox’s outfit is just a red blanket sleeper, a simple felt headband (with some fabric stiffener ironed to the back of the band) and some triangle ears sewn on. It attaches with velcro in the back by folding over itself. We have a red sock tail with a white tip painted on it, and it pins to the back. The little fox always steals the show!