Not long ago, I read a blog entry from “Teach Preschool”’s Deborah Stewart called Thanksgiving time story telling with symbols in preschool.  As I read about this idea, it occurred to me that it would be a great idea to combine it with my existing Sound Effects Story for Thanksgiving! (Click here to see the post with the Thanksgiving Sound Effects Story.  It’s free!)  So I tried it and it was a huge hit!  My students were totally enthralled, and just loved it!

I have done other kinds of “Draw and Tell” stories before, and they have always been very well received, so this should have been no surprise.  However, I have never tried to combine the two ways to tell a story.  I have to say that the first method really just enhanced the other! 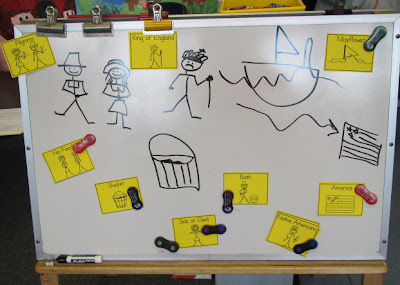 So basically, this is what I did:  when I told the story for the very first time, I told it sitting next to my white board easel.  I showed them the picture icons that I am including as a free download for you today, and I drew the pictures as I went along.  I also taught the children the sound effects as I drew.  So I as I drew the stick figure pilgrims, I told them about the pilgrims and then told them to say, “Hi, there!” each time they heard the word “pilgrims,” etc., which was one of the “sound effects” that the children were supposed to say whenever they heard that target word as I read the Thanksgiving story.

I made one set of the pictures with titles, and the other without so that you could use them as you wish. As you can see, this picture shows the icons with the titles, but the icons shown in the other picture do not have them.

I actually ran out of time to finish the story before the end of the day when I introduced it, but he kids were so interested in it that at dismissal time, they did not want me to stop to send them home!  That actually really surprised me.  But what surprised me even more was the fact that the next morning, they came in asking me to finish it, first thing in the morning!

That day I left the picture icons clipped to the white board easel with magnets, and at playtime I had at least eight children all clamoring to draw those pictures on that one small easel, so I got out a bunch of individual white boards for the children to use and let as many children draw as they wished.  They had a wonderful time, and they were all telling the story as well!   I just wish I had remembered to take a few pictures of them doing that.  Darn!

In any case, click here to download the file with the Thanksgiving picture icons!  I hope that you will enjoy using these in your Thanksgiving story telling. 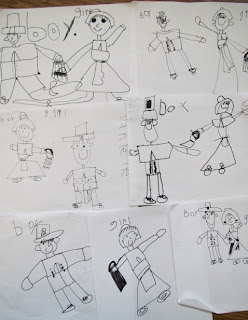 This is a photo of the children’s Thanksgiving Guided Drawing pictures!  Click here for the free instructions for this adorable project, too!