Well, we finally did it! We found a place that would print our Sounds Fun cards for us at a reasonable price! We also made a Sounds Fun poster that is a wonderful thing to have, because it has all of the cards blown up in one easy to handle or hold poster. This is great news for everyone who has been put off by the idea of having to download and print your own Sounds Fun cards. The cards turned out beautifully! They are on a nice, glossy, medium weight card stock that look and feel pretty sturdy and may not even need to be laminated! 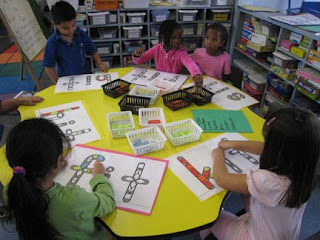 My kids love using the Alphabet Pattern Blocks cards and I have found that they can be used as a nice, ready-made literacy center for alphabet practice, and later in the year, to have the children make words, too!  Last year,I had my kids first make the words with real blocks on the cards.  Then, I printed out the letters for each child in black and white and had parent volunteers glue them down to help them practice certain “trouble” words, such as “that” and “they.”  I discovered that if you trim the letters very close, you can fit four lower case letters on a 12 x 18 piece of construction paper.  Then the kids can make their own big words to keep, by gluing down paper pattern blocks onto the shapes!  I had the kids do this activity with a parent volunteer one day.  Each child had either the word, “they” or the word, “that.”  When he or she was done gluing down the pattern block letters, then they had to share with the group (or at least the parent volunteer!) what word they made, and how they knew it was “that,” instead of “they,” etc.  This seemed to really help them zero in on the differences between each word, and the children seemed to have a much better grasp of these two words when we were done with this activity!  Of course, the spelling songs help, too! 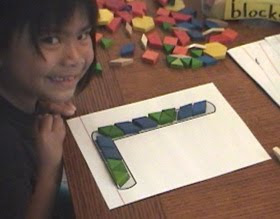 Yesterday, my daughter had her friend Joe and his six year old little sister Lisa over to swim.  We asked her if she would be willing to try out our new Alphabet Pattern Blocks Cards, and she was happy to oblige!  She had never seen the cards before, but recognized the pattern blocks immediately from school, and seemed to know exactly what to do!  She just started in counting all of the colored spaces for the different blocks, collected the correct amount, and then placed them on the letters.  It occurred to me that with older children, you could easily assign a value to each block and then have them calculate the value of each letter, and then also each word!  By the same token, you could also assign each block a coin or dollar amount, and have a child calculate the how much money their name is worth!  I guess that the activities that you could do with these cards are only limited by your imagination. 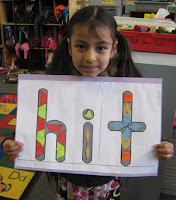 Last year, when I first introduced these Alphabet Pattern Blocks to my students, I was surprised that they really didn’t know right away what to do with them, or which blocks should go where!  It seemed so obvious to me that I figured that it might be too easy for Kindergartners.  Actually, it was more challenging than I imagined; I did have to explain that they would need to match the shapes and the colors, like a puzzle.  And, part of the challenge is in the fine motor skills.  They have to place each block carefully where it belongs, and then put the next one down without knocking off the first ones.

As far as the Sounds Fun cards are concerned, my class this year made incredible progress by using these cards!  I introduced the /sh/, /th/, and /ch/ as they became necessary in the fall.  Then, in January, I introduced the rest of the cards.  I was a little nervous about introducing the cards, because I always wonder if it is going to confuse them with their regular letter sounds.  But so far, it hasn’t, and this is the second year that I have used the cards!  The kids absolutely loved doing the actions in the cards, and seemed to remember the characters and their sounds almost immediately.  The day after I introduced them, as the children entered in the morning, they noticed that I had placed a set of Sounds Fun cards on the wall.  The first thing I heard out their mouths was, /ow!/, /ar!/, /er!/, /oo!/, etc.  In fact, that whole week, there seemed to be barely a moment when someone was NOT muttering one of these sounds to themselves!  It just about drove me bonkers!  This was an incredibly verbal class that I had, and then loved to talk (and apparently, also make all kinds of random sounds!)  Thankfully, they got used having the cards on the wall, and eventually were able to concentrate on my lessons again without continually muttering the sounds to themselves.

I probably drilled the class on the Sounds Fun cards three times a week in January, and maybe a handful of times in February.  After that, we just referred to the cards on the wall and the poster when we needed a sound.  Everybody seemed to know most of the sounds, and by the end of the year, many of the children were able to make a sound to themselves and think of a possible spelling without looking at the cards at all.  Lots of children were finding these letter combinations in the books that they were reading, too, and they were quite excited to find them there!  It was like somebody showed them a secret code. 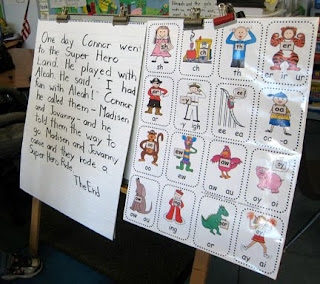 I especially LOVED having a Sounds Fun poster!  I really felt that I needed one, but the posters that you could have printed online were too expensive.  So I had my husband make one for me by blowing up the Sounds Fun Single Sheet at work so that it would be poster sized and printing it out there in four sections. Then I glued it to a poster board, and laminated it.  That’s what I had to do to get my poster!  Luckily, we now have one that is affordable and ready to use.  I like having my poster right on my white board easel where I did a lot of writing with my class. I kept the poster on the back of my easel when I wasn’t using it, and then brought it around to the front and clipped it to the side of the easel where they could see it when I was writing  Each time I came to a sound that was on the Sounds Fun cards, I made the sound and asked the kids what character made that sound.  Somebody always knew, and then I would have somebody point to the right character.  Then I would copy the letters that made that sound and go on with my sentence.  It was incredibly helpful!  Then I put copies of that same Sounds Fun Single Sheet on my writing table so that they could see the letters up close whenever they needed them.  I do have the cards posted on the wall, but there are so many things posted on the wall that after a while, it gets to be a bit too much of an issue of sensory overload!  Also, you can’t possibly post all of the word wall words and all of the alphabet, plus all of the Sounds Fun cards close enough to every child so that they can see them well enough to use them easily.  So that is how I came up with the idea of putting them all onto a single sheet.  Luckily, they all FIT!  Now I have enough of these single sheets printed out for the children to all have one attached to their wandering word walls. 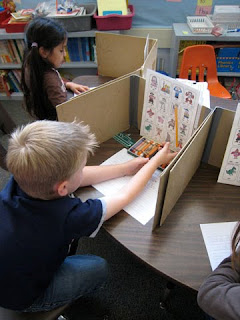 My kids were writing some pretty amazing little stories by the end of the year, if I do say so myself!  And I think that a big part of that was that they had a very good handle on the alphabet sounds, and knew how to “encode” most of the rest of the sounds that they encountered when they were trying to sound out and write their words, thanks to their Sounds Fun cards.