If you have been following my blog this year since September, you may have remembered me mentioning that I have been trying to keep an independent science center going all year long!  This is mostly because I am preparing for a new presentation on Science Centers that I will be giving at the I Teach K! Conference next summer in Las Vegas, Nevada.  My goal is to collect and present ideas that take little or no prep time, with materials that most of us probably have in the classroom already!  So I have been trying out ideas and trying to work the kinks out of each of them.  Well, in December, we spent a little time on magnets in our science center.  In addition to painting with magnetic marbles, here’s what we did: 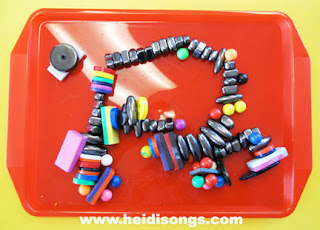 Week One- Explorations with Magnets
The first week, I let them simply explore my collection of magnets.  Now for my students, this is a real treat, because I usually only let them play with my special magnets as rewards, and this is the first time I set them out for the whole week!  I have some neat Hematite Magnets that are so strong that you can wrap them around your wrist like a bracelet, some “Rattlesnake Egg” magnets, (also known as “Singing Magnets,”) that make a buzzing sound when they touch, and some “Floating Rings,” that are actually flat magnetic disks with a hole in the middle.  When you put them in the correct order on a small post that they are sold with, they repel each other and therefore float in midair!  Plus, there are a bunch of miscellaneous magnets that are just plain fun to experiment with, so week one of pure exploration was wonderful! And they would have been very happy with two full weeks of nothing but this! 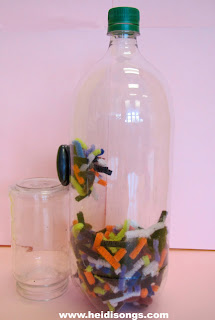 The pipe cleaners must be short:  1/2 inch long!

I also had seen a neat idea on Pinterest in which somebody had cut up a bunch of pipe cleaners into small pieces and put them into an empty soda bottle.  The idea is that when you hold a magnet up the side of it, all of those colorful pieces follow the magnet!  So I decided to try to make one of these as well.  I’m not sure if my empty soda bottle happened to be made of a little bit thicker plastic than usual, but my strongest, best magnets had a little bit of trouble pulling up the pipe cleaners in big bunches the way the picture on Pinterest showed!  It could also have been a case of my pipe cleaners not having enough iron inside them to be firmly attracted to the magnet, too!  But I guess figuring that out is an experiment for another day.  I actually had to try to dump out all of the pieces of pipe cleaner that were cut perhaps a bit too large (not so easy!), and then cut them in half to make them lighter.  Luckily, I received the help of a high school girl who happened by after school, thank goodness!  Once the pieces were cut into approximately half inch strips, they were much easier manipulate via the magnet through the plastic. 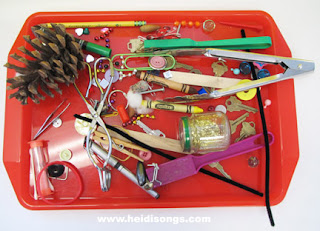 My Magnetic Vs. Non-Magnetic Sorting Collection

Week Two- Sorting by Magnetic and Non-Magnetic
The next week of centers, I had them experiment with trying to figure out what common items will attract a magnet and what will not.  I instructed the children to first predict what they thought would happen with each item, and then sort it into the correct basket.  I had a red basket labeled with a sign that said, “Does not attract a magnet,” and a green basket labeled, “Attracts a magnet.”  If you would like a copy of these signs, you may download them here!

I had a little bit of trouble at first, trying to figure out what to put in the collection of things for them to experiment with.  The things that did NOT attract a magnet were easy to find.  The others were not as easy!  So then I had a brainstorm:  I took my strongest magnet and ran it through the top drawer of my incredibly cluttered desk, and it picked up TONS of items that attract a magnet!  And many of these turned out to be non-toxic and safe items for children to handle, LOL!  Once I established this methodology, it became much easier to find things in my classroom that attracted a magnet.  I just kept a magnet in my hand and ran it over everything I could see!  (Duh!)  Here is a list of a few of them: 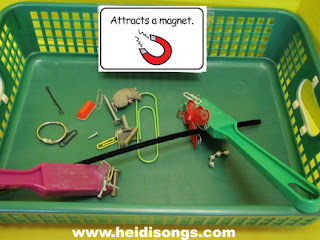 Attracts A Magnet:
tongs (two different kinds)
nuts and bolts
a shelf holder (the kind you shove into a hole in a bookshelf to hold a shelf where you want it)
paper clips of all sizes
pipe cleaners
O-rings
Tweezers
Clothespins (the metal hinge is sometimes made of iron)
Some Ink pens have metal cases
Some metal buttons
A belt buckle 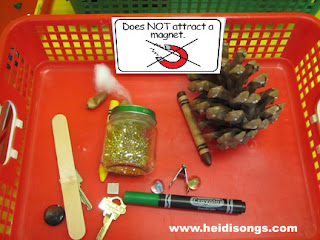 Does NOT Attract a Magnet:
(These are the things that I included that I thought would be interesting for the children to experiment with)
Glitter in a baby food jar
Keys (I never found one made of iron)
Metallic looking beads
Plastic buttons
A penny, nickel, and dime
Tongue depressors
Rubber bands
An egg timer
Pine cone, acorns
Crayons, markers, pencils
Marbles
Fake gems and polished river rocks

A few people have asked me if I ever plan on writing any science songs to add to the collection on our website!  The answer is yes- I do hope to write some, and I have a short list of ideas so far.  And I already have a few that I am already using:  there are Season Songs on the Little Songs for Language Arts CD/DVD, and the Wide Mouthed Frog Play‘s overture is actually a song about the life cycle of the frog!  The Number Eight Spelling Song on Sing and Spell Vol. Five keeps telling the kids over and over that there are eight legs on a spider, so I sing that one when we study spiders.
If you have a topic for this CD that you would like included, please let me know!  I don’t know when I will be starting it, but I hope to get to it sometime in 2012!