Have you ever thought about combining your social studies topics with science or STEM projects?  Well, that is what I have been trying to do this year, and in this post I am going to tell you about a few of the ideas I have for December!  We won't have time to do them all, but I wanted to just throw them out there so that if any of you want to try them, you'll have time to make it happen. Sound interesting?  Read on to find out more! 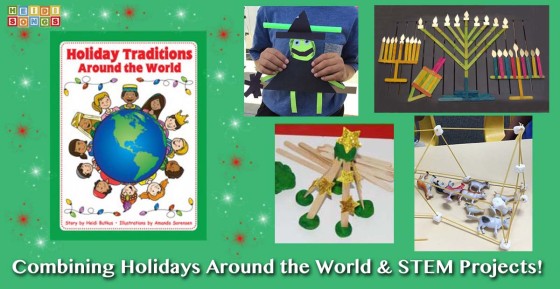 It turns out that giving STEM projects "a theme" really isn't that hard; it's really a matter of thinking creatively as you plan them and giving them a different name than you might have otherwise.  So this is my method.  I start browsing around on Pinterest and online to see if I can find a fun STEM project that catches my eye. I search under terms related to that holiday or event.  For example, for December I searched under STEM or science and then added some keywords like tree, sled, snow, candle, etc.  After that, I see if I can find a way to adapt the project to the current theme by changing it slightly or renaming it.

For example, if you have been following my blog this fall, you may remember that I did a STEM "Punkin' Chunkin" project in October a few years ago, in which the children made catapults out of craft sticks and masking tape, and then tried to hurl their "punkins," which were really just orange pompoms as far as possible.  In this case, the catapult project was just a regular STEM project that I renamed as a "Punkin Chunker" to make it fit the October season, just for fun. 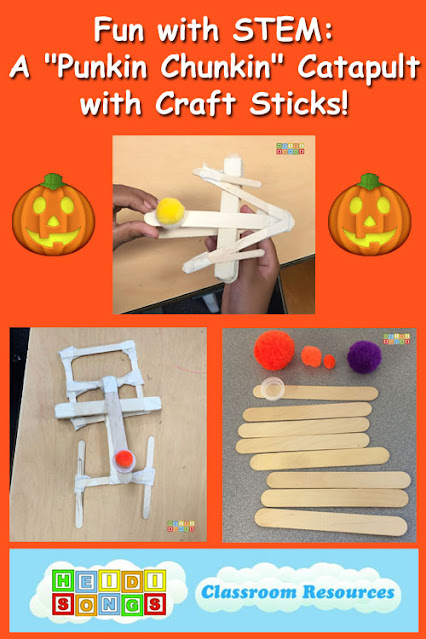 Before that in September, we did a Back to School Apple Jenga STEM project that I adapted from another idea that I saw on Pinterest.  I just switched the item on top of the tower to be an apple rather than a tennis ball, and used the blocks that I had available to me! 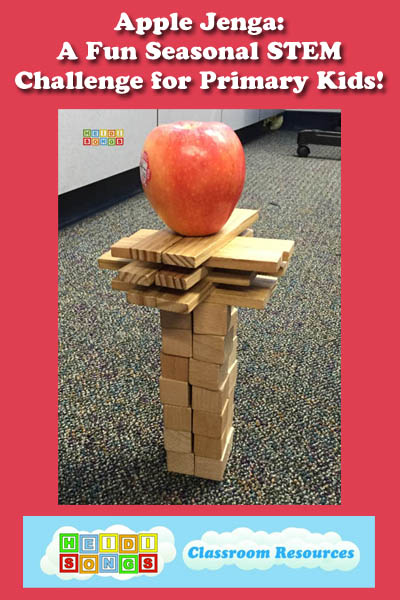 We have done a few other seasonal STEM projects too, but I will have to save those for another post!  For now, here is what I have planned for December to go along with our Holidays Around the World Unit.  The first thing that I do is teach the children a little bit about a country and its traditions.  I happen to use my own book, Holiday Traditions Around the World for this, because it is short, sweet, and to the point!  (I wrote it that way because there just doesn't seem to EVER be enough time in the day!)  I also like that I only have to have just the ONE book for 16 different countries holidays, rather than 16 different books, which I can't store and don't want to purchase. 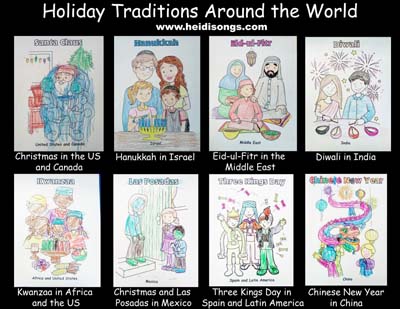 You can print the book in color, but it also has black and white coloring pages for the children to color as well. The book can be purchased printed or as a download.


Germany and the Christmas Tree

On Friday this week, we studied Germany and their tradition of decorating a Christmas Tree.  If you read this blog post here, you will also see how I use Google Earth to help the children "visit Germany" and bring up some real photos, too!"  For our STEM project, I gave the children the challenge of making a tree that will stand up by itself using just two large sheets of green construction paper, tape, glue, and four craft sticks.  Frankly, I had no idea what they would come up with, but I figured we would find out!  The whole thing is a big experiment anyway!  I am getting more and more adventurous with my STEM projects. 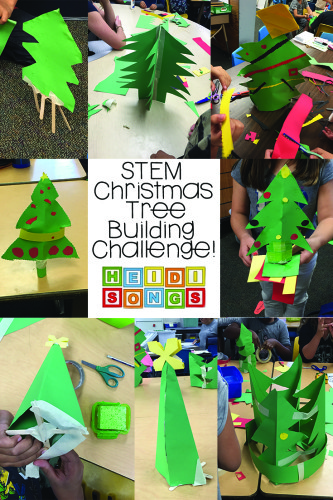 STEM Christmas Tree Building Challenge:
Can you build a tree that will stand up by itself, using just the supplies given?

This time, I did not have any type of sample or idea of what it would come out like.  I just gave them some things to work with and let them go!  It helps a lot that we do this with our fifth grade buddies, though!  So no matter what, I knew that they would come up with SOMETHING!  Below are some photos of what they made.  It was a lot of fun! 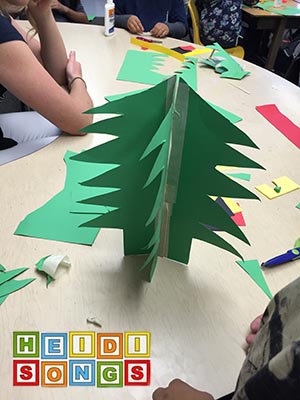 This was probably the best one that they came up with in my opinion, but there really were a whole lot of GREAT designs that I never would have thought of on my own!

After they were done, I made one of my own, below.  This is kind of what I thought they would do: make a tube and then attach the greenery. Yet NOBODY did this! I'm so glad that I did NOT provide a sample! Otherwise most of them would have copied this idea, I'm sure! 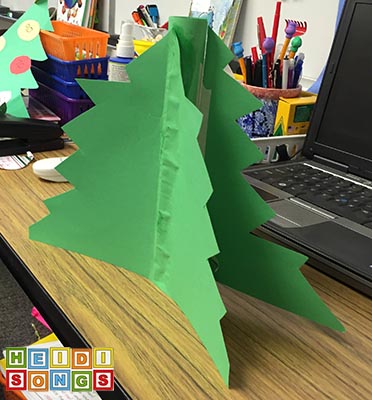 There are many ways to make a Christmas tree, and I have seen TONS of them on Pinterest!  I chose to go with the cheapest one, which is just giving them paper and some things I already have around the classroom.  I would like to give them all green gum drops, but doing that for an entire class would be very expensive! 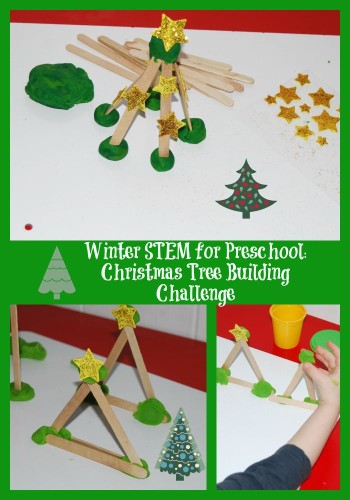 Here is one Christmas Tree STEM project I found on Pinterest. You can find it here. 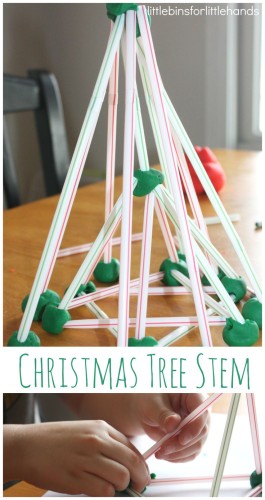 Here is another version made with straws. You can find it here.


Hanukkah and the Menorah

I think that having the children build a Menorah out of craft sticks might be a fun thing to do!  There are many designs online to copy, but it would be a much STEM better project if the children had to make up their own- especially a Menorah that will actually STAND UP!  Now that would take some engineering and some thought! 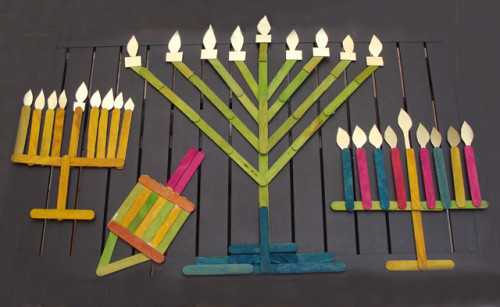 You can find this one here.


Christmas and Pere Noel in France

In France, Pere Noel comes to town riding a donkey rather than a sled.  So perhaps the children could build a shed for Pere Noel's donkey with craft sticks and marshmallows or modeling clay?  We did the same type of project when we studied the farm.  I got out my small plastic farm animal counters and had them all count out ten, and they had to build a barn large enough to hold all of the farm animals with marshmallows and spaghetti noodles.  It was fun, but harder than we expected!  You can make it harder or easier by requiring a roof, or letting them simply make a fence or corral. The thing that made it hard was inserting the noodles into the marshmallows without them breaking, and making a roof without it collapsing.  I'm sure it wouldn't be very hard with craft sticks! 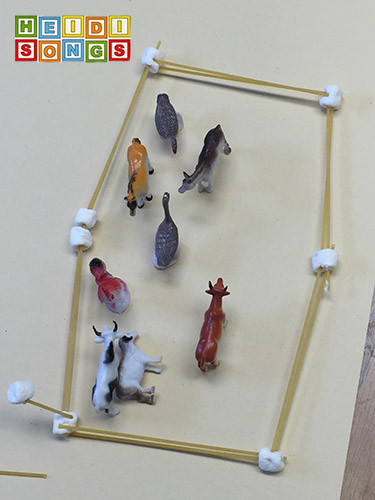 Farm STEM Corral- One of my students couldn't make a roof stay up on his barn, so he made a corral for his farm animals instead. Smart kid!  This one was done by a first grade boy. 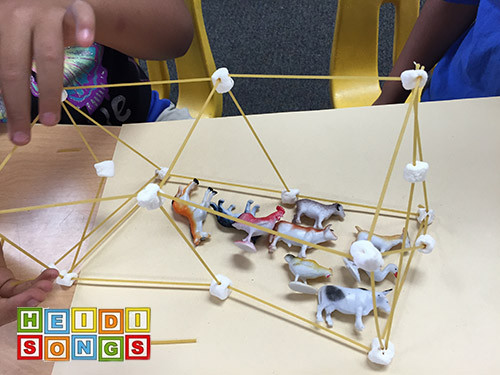 Farm STEM project barn: These children used a cube design to make their barn. This was a first/second grade team of two girls. 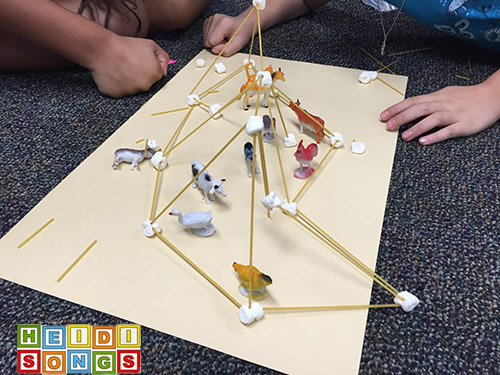 Farm STEM barn project: These children went with a pyramid design. This was a first/second grade team of girls.


Christmas and La Befana in Italy

Children in Italy get their presents from a Christmas witch called La Befana that comes in riding a broom!  So perhaps the children could make a zipline project and create a witch that rides a broom?  We did something like this during the month of October.  But for this project, I let the children create either a bat, an owl, or a witch.  I just set out a lot of paper and some straws, and gave them some glue and tape.  I also provided some cardboard so that their projects had a little bit of weight to make them slide down faster! The only requirements were that the completed project would need to slide down the zipline!

This was LOTS of fun!  The only problem was that we ran out of time to finish before it was time to go home.  I wound up sending yarn home with the children so that they could experiment with the zip line there.  I intended to have zipline races, but they just didn't finish, and they were SO excited to take their projects home, so I decided to let it go. 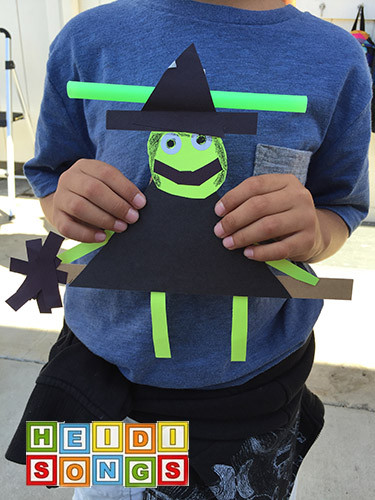 This zipline witch STEM project really flew nicely! The children had to try to add enough weight to the project to make it slide down the zipline the fastest.  So I provided pieces of cardboard cut into squares and rectangles for this purpose.  They could also cut them into other shapes if they wanted to. 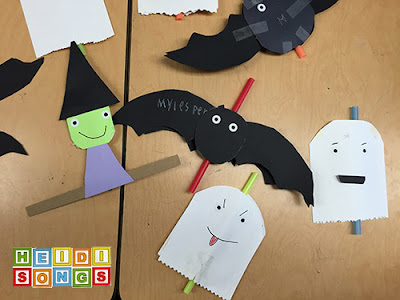 Zipline Halloween Projects: Notice that each of these has a nice, FAT, straw in the center of it so that it could slide down a piece of yarn.

Another project that I would like to do is to have them make a sled out of craft sticks, and see if they can make one that will actually slide down a ramp!  I've been collecting pictures of craft stick sleds on my Pinterest boards for this purpose.  This would be better if we had actual SNOW or ice, but since we are here in southern California, that's not going to work.  So if someone makes this happen, can you let me know?  :)

I also really like the STEM snowflakes that I found here, and would LOVE to make a bridge for the Gingerbread Man!  We'll just have to wait and see what we have time for!  We are also preparing to put on our annual Gingerbread Man play, so we are busy, busy, busy!