These are Sight Word String-Ups!  I use these quite a bit in my classroom, and my kids always enjoy using them.  I’m posting this “mini-blog” early in the week because these plastic pencil boxes that I use to make these Sight Word String-Ups are on sale this week at Office Depot for just one penny each (at least in my area, anyway!  You’ll have to check with your local store, of course, if you want to make some.  You may also want to call and find out if they still have any left in stock, because at least where I live, they run out of this item every year when they put them on sale for a penny.  The teachers all snap them up right away!  Our local Office Depot allows teachers to buy up to 30 items each if you have one of their teacher cards.  However, I understand that not every store follows this policy, so check with your local store before investing time or money in the project, for sure. 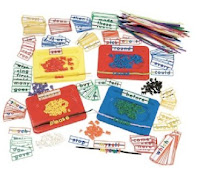 I refer to these Sight Word String-Ups often in my presentations because it is a favorite activity of mine!  Recently, I received an email from someone that was a participant in one of my sessions last year and was looking for a blog post on them, and it was then that I realized that I had never written one!  (Duh!)  So here it is: Sight Word String-Ups are actually a kit that is sold on Amazon.  It comes with four trays, a bag of letter beads, some pipe cleaners, and a bunch of flashcards.   I gave up on using their trays a long time ago, because four trays is not enough for my small groups, so I just use the beads and pipe cleaners.  I also use my own flashcards, because that way we only wind up working on the words I consider to be the most important. If you decide to purchase only the letter beads as I did, here is a link to them on Amazon, though I got mine from ReallyGoodStuff.com as well.   Unfortunately, Really Good Stuff has now discontinued this item.  I got the foam self-adhesive on letters on the boxes from Discount School Supply. 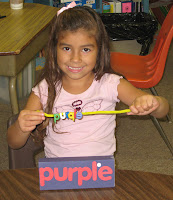 All I did was put the letters for each word in a pencil box, along with a pipe cleaner purchased from Michael’s.  (One year, I also put in Unifix cubes with letters on them as you see in the picture, but it proved to be somewhat confusing so I took those out.)   Then I put the foam letters for each word on the top of the box.  I ran out of a couple of the vowels and had to make a couple of  e’s out of c’s, and so on, after I hit box number thirty or so.  So you might want to buy more than one bag of letters if that bothers you.  After I had decided to make 50 boxes of them (since my district increased the number of words required,) and I did go back and reorder some.  I also made a few boxes with the children’s names on them for some struggling students that had a terrible time learning the alphabet, because I decided it would help them learn the letters in their names to start with.

But in this case, I just taped a paper with their name on it rather than putting the foam stickers on the pencil box since it would be only temporarily used.  Of course, THEN I had to order an entire bag of upper case letters just so that we could practice stringing our names- and that was a whole bag of letters of them I had to buy when I only a few!  Go ahead- say it:  Been there, done that!  (The foam stickers do leave a lot of bumpy residue if you try to remove them, so it is best to think of these letters as permanent once you decide to place them on the box.

Have fun with them if you decide to make some!