Hello, everybody!   Today I am going to tell you about my all time favorite apps for Pre-K, Kindergarten, and First Grade.  Of these, my personal favorites are marked with a star*, too, so that you will know that these are the very best of the best, in my opinion!  In the coming months, I will try to elaborate on these apps as time permits, and tell you a bit more about each one.  Otherwise, you can click on the links for the apps that interest you and read the reviews.

Basically, to use these apps, I put them in folders on my iPads according to skill. Then I tell the children which folder they should be on that day.  For example, on Mondays, they might work on rhyming words when they get to the iPad station, but on Tuesdays, it might be number recognition or patterning.   On Wednesdays, they might work on the alphabet or sight words, etc.  If the children chose to play with the iPads during their playtime, they are allowed to just explore and play with whatever app they can find.  In that case, they have to figure it out themselves, or they can’t play with it!
Having a folder with apps in it seems to be very helpful and much better than having just one app for each skill.  For example, none of the rhyming words apps below is super exciting.  But the fact that there are four different apps to choose from really helps.  If they get tired of one, they can move to another one and try that.  It’s still the same skill, so it really doesn’t matter, and for the child that needs to feel in control it is always good to offer choices.  And for example, my folder for patterning has only two apps in it, and I was getting complaints from the children that day about them being “bored” and wanting to do something else.  I would guess that if I could find two more apps to put in that folder- even free ones that are no more exciting than what I have- they would be more content.

To get the kids started with a new app, I usually give the class a very brief (a one or two minute whole group explanation) on how to play with the app before we begin our centers.  And sometimes, I run out of time to explain any of it!  I just put the apps into the folders and let them go!  These little “digital natives” just seem to figure it out on their own.  I have actually NEVER had a child tell me that they don’t know how to play a game.  They just keep exploring and pushing “buttons” until they figure it out, or they ask a friend.  It really is quite amazing to watch!  If I can find the time to demonstrate an app by hooking up my iPad to the projector so that everyone can really see what is happening, and give the children a few turns to push the buttons, then the excitement to play that game really grows!

Do they stay on the apps within the folder?  Well, not so very well.  It seems that every time I walk over to check on them, I find one iPad out of five on the wrong app.  They may be in the math folder on rhyming folder day, or in the alphabet folder on number app day, etc.  I would be more willing to discipline them if they were doing something totally non-academic, like the PhotoBooth!  But it is only six weeks into the school year, and the are really so little, that at this point I am not really sure how to handle this, so I usually just turn a blind eye!  If some clever programmer makes an app that would make it impossible for a child to exit a folder full of apps, I bet that person would make a ton of money!
In case you are not familiar with how to put apps in folders on the iPad, it’s actually very simple to do!  To make a folder, just follow these steps: 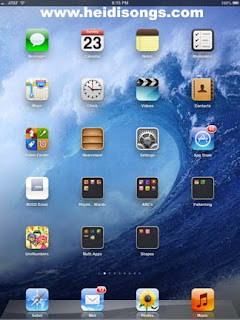 1.  Press down and hold an app until it starts to wiggle.  You will see an X in the corner of the app’s icon.
2.  Then drag it on top of another app that you would like to place in the same folder.  You will see that a black box will appear, with two icons inside of it.  Both of these icons represent the apps that are inside of it.
3.  You will then be given the opportunity to rename the folder.  Just click on the “x” to remove the name that the iPad gave your folder automatically, and change it to whatever you would like it to be. 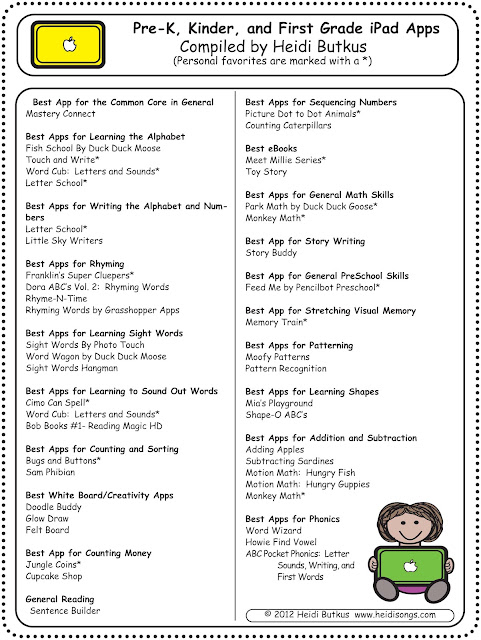 Common Core Standards
Mastery Connect   FREE! (An extremely easy way to look up the exact standard for your grade level that you are teaching, and the deconstructed standard that goes with it!)

Best Apps for Learning the Alphabet
Fish School By Duck Duck Moose  $1.99 (Best for Pre-K; my Kinders this year found it a little boring.)
Touch and Write*  $2.99  (Write your letters in pudding, ketchup, paint, shaving cream, etc.!)
Letter School*  $2.99  (And totally worth it!)

Best Apps for Writing the Alphabet and Numbers
Letter School*   $2.99  (This one is so good I put it into TWO categories!)
Little Sky Writers  $1.99  (Also a very good app, but the kids seem to choose Touch and Write and Letter School most often when given a choice.)

Best Apps for Rhyming
Franklin’s Super Cluepers*  $.99   (The kids really liked this one!)
Dora ABC’s Vol. 2:  Rhyming Words   $1.99  (This rhyming app was the choice of the girls.)
Rhyme-N-Time  $1.99  (This app is slightly more complicated than the other rhyming apps.)
Rhyming Words By Grasshopper Apps   FREE!  (VERY simple and easy to use.  Boring, even…)

Best Apps for Learning Sight Words
Sight Words By Photo Touch  FREE!  $1.99  (You can customize the lists of words on this app.)
Word Wagon by Duck Duck Moose  $1.99  (This game only does one thing at many levels, but it’s a good one!)
Sight Words Hangman  1.99  (This would be better if you could choose the words on the list that it gives the kids, so it’s best for first grade and up.  My kinders still liked playing it, though.)

Best Apps for Learning to Sound Out Words
Cimo Can Spell*  $2.99  (Good for CVC words and beginning phonics)
Bob Books #1- Reading Magic HD  $1.99 (Very good practice, but my kids don’t like this at ALL!)

Best Apps for Counting and Sorting
Bugs and Buttons*  $2.99  (This is one of the children’s all time FAVORITES!)
Bugs and Bubbles  $2.99  (This is more of the same type of thing, but with lots of butterflies.)
Sam Phibian   FREE!  (Follow the directions and feed the frog the designated amount of the correctly colored bugs.  But watch out!  Feed him too many, and he’ll fall off the lily pad and get eaten by the crocodile!!  The biggest problem with this game is that it is more fun to get it wrong than right.  The boys LOVE this game!)

Best White Board/Creativity Apps
Doodle Buddy  FREE!  (It’s a free white board app!)
Glow Draw  FREE!  (This is like a white board with florescent glowing colors over a black background.)
Felt Board  $2.99  (This is just like playing with a felt board, but on the iPad and with gobs of pieces that never get lost.  Try creating a scene and then writing something about it!  Kids LOVE this one!)

Best App for Counting Money
(Both of these apps are much too hard for Kindergarten, in my opinion!)
Jungle Coins*  $2.99  (Gives you coins and asks you to count them in a “jungle-y setting.  Leveled.)
Cupcake Shop  $1.99  (Buy cupcakes and make change.)

Best Apps for Sequencing Numbers
Picture Dot to Dot Animals*  $1.99  (Allows you to customize the number of dots from 0-30, or use skip counting, or even use letters instead!  When the sequence is finished, a photo of an animal appears.  Kids love this one!)
Counting Caterpillars  $1.99  (Very good for sequencing numbers, but it gets dull for some kids quickly because it has only one game to play at many levels.)

Best eBooks
(These Millie books are totally adorable books that function like pop-up books on the iPad with a real little dog as the star.  The kids LOVE these and go back to them again and again!  Very addicting!)
Meet Millie*  FREE!
Millie and the Lost Key  $1.99
Millie’s Book of Tricks and Treats  $.99
Toy Story   FREE!  (You usually get what you pay for, but that is not the case here!)

Best Apps for General Math Skills
Park Math by Duck Duck Moose*  $1.99  (We used this a LOT!  This is the very best app from Duck Duck Moose, in my opinion.)
Monkey Math School Sunshine*  $.99  (An amazing deal, and a class favorite.)

Best App for Story Writing
Story Buddy  $5.99  (Kinders would need help with this unless you are making a class story.  First graders could be taught to use it alone by the second half of the year.)

Best App for General PreSchool Skills
Feed Me by Pencilbot Preschool*  Free with lots of in-app purchases available.  (Best for Pre-K and the first half of Kindergarten, since it reviews and drills on alphabet, numbers, shapes, colors, etc.  Kids love this one!)

Best App for Stretching Visual Memory
Memory Train*  $1.99 (Highly recommended!  I have a hunch that this app could help a child with ADD or autism learn to focus.  But that’s just a hunch.

Best Apps for Patterning
(The children get tired of both of these apps, unfortunately.  I haven’t found anything better that practices strictly patterning and nothing else.  If you have found one that the kids like, please let me know!)
Moofy Patterns  $1.99  (Of the two, this app is better than “Pattern Recognition.”)
Pattern Recognition  $.99  (When we did this last week, my kids actually asked if they could read books instead!  They did nothing to disguise or sugar-coat the work in this app.)

Best Apps for Learning Phonics>
(I still haven’t found the “one and only very best phonics app”.  But here are some good ones.)
ABC Pocket Phonics:  Letter Sounds, Writing, and First Words $2.99  (This one helps kids isolate middle and ending sounds, etc.)
Word Wizard  $2.99  (You can type words into this app and it reads them to you.  You could probably have children type their spelling words into the iPad on this app or make up games for two kids to play together on it, etc.)
Howie Finding Vowel  $2.99  (This app has several levels, and asks you to find the vowel sound/letters for the given words and pictures.  Unless you are on level one, it’s best for high kindergartners in the last trimester, or for first grade.)

Best Apps for Addition or Subtraction
(I really need more of these apps.  If you know of some good ones, please let me know!)

Motion Math:  Hungry Fish  $2.99  (Fact Families; no pictures.  Best for very end of K or First Grade.)
Motion Math:  Hungry Guppy * $2.99  (Addition at the pictorial level.)
Subtracting Sardines  $.99  (A good pictorial introduction to subtraction, but not very entertaining after five minutes.  It has only one activity and repeats it over and over.)
Adding Apples $.99  (The same as Subtracting Sardines, but for addition.  A good pictorial introduction to addition, but boring after five minutes or less.  It has only one activity in it.)
Monkey Math School Sunshine*  $.99  (I know I posted this already for general math skills, but it includes both addition and subtraction, and it is a really good one!)

If you liked this post, here are some other posts you may also enjoy:

Tips for the One iPad Classroom, and a Free Rules for the iPad Download!

A One-On-One iPad Program in Kindergarten

How I Introduced the iPad in My Classroom…