Getting Back Into the Swing of Things Last Monday was our first day back after our Christmas vacation, and boy, could I TELL!  We spent the first couple of days trying to remember what it was we learned before we left!  Most of my students are doing quite well.  But unfortunately, not all of the children got the reinforcement that I would have liked during this break.  Some of the struggling students are in exactly the same place academically as they were when I left them in December, and others are actually worse off than before!  Meanwhile, time marches on, so we review and hope for the best as we push forward to teach all of the standards that the children have to master before the next testing period begins again.  So here are some things that I have been doing with my kids towards that end! 1.  Word Family Review
We have been working on CVC words now since about the middle of November, and by now they “should” all be able to sound out -at, -an, -it, and -in family words.  I would say that about 75% of my students are doing this fairly well, but there is still a small group of children that only sound out certain words well- and these words are generally the ones in the CVC book.  I sent home the Student Flash cards for all of these word families from the CVC book, and gave them the assignment of practicing reading the words and matching them to the pictures.  The problem is that they need to also practice sounding out other CVC words that are not included in the book.  They also need to practice reading them on print that is not the same old flash cards, because I have noticed that though they may be able to read the word on the card, if I write it on something else, they often cannot read it!  So I decided to dust off the old “Rapid Automatic Naming (RAN) Boards.” 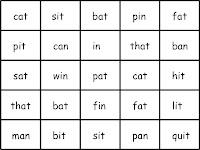 For those of you that are not familiar with this tool, it is more or less just a chart with words on it (or numbers, etc.) that you want your students to practice reading.  The idea is that though there may be 25 spaces on the board, you may have only five or six words on it to read, and these words are printed over and over again.  Ideally, you would have the child’s weakest word printed the most times, and the child’s strongest word printed the least amount of times.  After school, I prepared an individualized chart for each child in my low group using the guidelines above.

This is how I use them in a small group situation:  I passed out the charts to each child, and designated a word to look for and a color that he or she should make it.  So, each time a child found the word, “and,” he was to color it red, for example.  I got all of the children started doing this on their individualized charts and then stopped one of them to work with me on reading the chart while the others colored.  I spent about two minutes with each child, and then went on to the next one.  That way, I was able to work with each child individually for a couple of minutes.  I feel that this is really a great way to help those little ones that seem to only respond to one-on-one help.  It kept the group busy in a meaningful way while I worked with them one at a time.  Whenever someone finished finding all of their words, I would quickly tell them to find the next one and assigned it a color.

I am including a free download of a RAN board here; it has a mixture of -an, -at, -it, and -in words on it. To make your own, you should be able to just insert a table into any word processing program and type in each square, and then add the child’s name on the top.  That is what I do!  I also have some that I send home for homework practice, though these are usually not individualized.  The kids’ assignment is to keep track of how fast they can read the entire chart and then try to beat their own best time.  Here is a download of a blank RAN board as well in Word format that you should be able to edit. 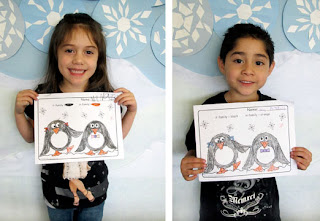 I made this little coloring activity sheet over Christmas vacation and figured that it would come in handy.  And it sure did on Monday morning, when we were short one volunteer!  The idea here is that the children identify which word family the word belongs to, and then color it accordingly.   If it belongs to the “it family,” they color it black, and if it belongs to the “in family” they color it orange.  This was still a great puzzle to my struggling learners, but to be fair, most of them really are “fall birthday babies” and are probably not ready to learn these concepts quite yet.  (And this probably explains why they are having those difficulties I mentioned previously, as well!) For those of you that are unaware, the current cut-off date for entrance to Kindergarten in California is December 2nd!  That means that I have children in my class that might not turn five until December 2 each year, and it is no surprise that these children often have great difficulties grasping concepts such as sounding out words.  Sight words seem to be not a big problem for them, considering most of these little ones learn well through music, and the Sing and Spell program does wonders for them!  It’s the “thinking concepts” rather than the rote memorization concepts that puzzle these sweet little ones.

Luckily, the California cut-off date for entrance into Kindergarten is changing starting next fall. They are backing the date up by one month each year for the next three years until it will finally settle on September first in 2014.  I am greatly looking forward to having more children that are physically, cognitively, and emotionally ready to begin their formal education on the day they begin school, rather than three and a half months later.  Kudos to the California Kindergarten Association for their hard work in pushing this bill through! 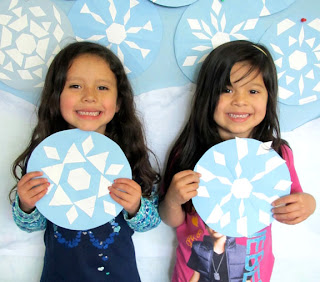 3.  Symmetrical Pattern Block Snowflakes
This is a fun project we do for math each year:  we make symmetrical snowflakes out of pattern blocks!  All you have to do is start with a blue piece of paper cut into an eight inch diameter circle.  I have parent volunteers cut them out for me and glue a white hexagon paper pattern block in the middle.  Then I have them fold and unfold the circle into sixths so that the kids can see some defined sections in the circle.  I also have them cut out a bunch of white paper pattern blocks.  If you need the masters to run off the pattern blocks, they are here as another free download! 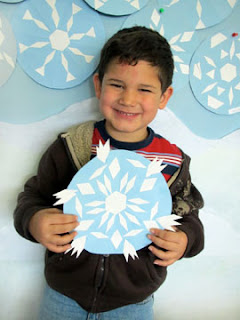 To introduce the topic, I tell the children that something that is symmetrical is something that is the same on all of the sides or parts.  So we will be making snowflakes that are the same in each section.  I put some baskets of the white paper pattern blocks on the table and then I ask each child to pick one block out and hold it.  Then I go to each child and ask him where he or she would like that block to be.  The child points to the spot in one section where he wants it glued down, and I then put a dot of glue in that same spot in each of the sections.  The key here is that there is only one bottle of glue, and the teacher controls it, placing a dot of glue in each spot that the child identifies.  Once the child has laid down pattern blocks on each dot of glue, then I have them pick another block and again tell me where they want it.  They continue on this way until the snowflake is finished!  It’s fun to make at least some of them double sided and then hang them from strings on the ceiling.  We usually just make snowflakes cut out of paper the usual way for the other side of the snowflake.  I often have their book buddies help them with this, since cutting on folded paper can be difficult for little ones.

4.  Sound It Out Snowman Game 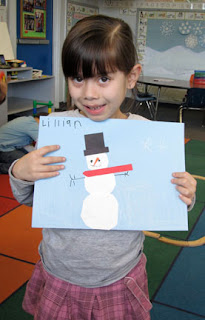 Well, I received an email from a blog reader who wanted to know if I was going to make any more of my seasonal sight word games that I have been giving away recently on my blog.  I replied that hadn’t thought about it yet, but would consider it.  So I decided to have a “chat” with all the nice gals that frequent my HeidiSongs Facebook page, and asked them if their students were tired of the “Sight Word Santa” type of game that I have been making, in which you hide something under one of the seasonally themed word cards and then have the children guess which card it is under.  The answer was a resounding, “We’re not tired of it; please make another!”  I figured that since we are studying winter and were learning the Let’s Make a Snowman song from Little Songs for Language Arts, a snowman theme might be good, and the consensus from the Facebook page agreed.  But that type of game needs a rhyme for the kids to repeat when each time someone takes a turn.  So I came up with this little rhyme to go with it, but I knew it wasn’t as good as it could be:

We all agreed that this was a FABULOUS idea!!!!   I LOVE it!  So thanks for contributing to the brainstorming session, Kristen!  You inspired me to finish up the project and get it out on this week’s blog.   I knew that rhyme was a little substandard, but was having trouble fixing it!  It’s just lucky that I happened to wake up with a really bad “we just had a huge earthquake” nightmare at 4:00 AM, and decided to get up and create it rather than attempt to sleep for one more hour and then get up again.  (Thank goodness it was only a nightmare!)   The only thing is that now my snowman picture had to be “hatless,” but that was no big deal.  He’s not as cute, but I think we can all deal with that, right?  Here’s your free download of the Snowman Game.  The only thing is that I felt like my kids are doing pretty well with the sight words because of the Sing and Spell songs, so I decided to make it a word family game instead. There are still blank snowmen at the end, though, so you can make your own cards.  I was thinking that you could play memory with them, too!  Just have them match one word family card to the same word family card!  Example:  hat and mat would match, because they are both from the “at” family.  There are even numbers of each word family card, and I included words from the -at, -an, -it, -in, -ip, and -ig word families, since this is what I am working on now and in the coming weeks.