This year, I have been blessed with a talkative, but sweet group of 28 children!  Yes, there are 28 of them!  But we are now at the end of our first trimester of Kindergarten, and we have hardly had any fist fights, pushing, or kicking, etc.  We have had some other small problems- especially with children forgetting to raise their hands before talking, a little bit of mischief and silliness here and there, but hardly any problems with fighting!  I am not entirely sure if this is just a result of luck or pure coincidence that we have not had too many problems of this nature as compared to past years, but I would like to tell you what I am doing differently this year and you then can judge for yourself. 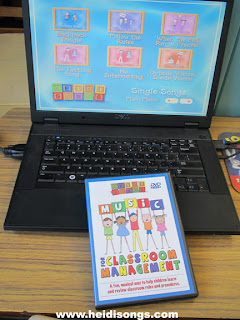 The Classroom Management CD/DVD helps a lot to reinforce the rules. And we now have an ANIMATED version! (Pictured above is the old version!)

If you have been following my blog for at least a couple of months, then you know that I have been using my Classroom Management CD/DVD to teach and review the rules.  We have been singing the Follow the Rules song each morning as a part of our morning routine,  as I wrote about last week, assuming that there is no parent waiting to speak to me, nobody is crying, the phone is not ringing, and there is no other crisis to take care of!

(I am not really sure how often my job share partner, Mrs. Paez squeezes it in on her days.)  But I am certain that they sang this song about an average of at least twice a week while I was teaching.  Mrs. Paez and I also both read the Wiggles Learns the Rules at School book and used a puppet to teach the rules several times over the first two weeks of school, and also the Wiggles Learns to Pay Attention book.  If you would like to read more about this, click here. 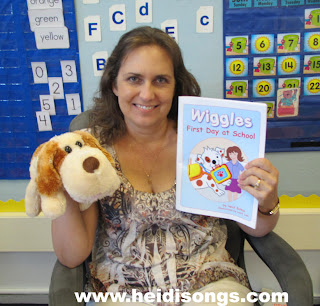 We also sell this adorable Wiggles puppet! Only $10!

However, I waited until the first real issue with pushing or hitting happened, as it always eventually does, before teaching the “Fight” song and introducing the visual aid posters that go with it.  (This song is on both the Classroom Management CD/DVD, and also on the Sing and Spell Vol. 5 CD/DVD.)  In the “Fight Song,” the children spell out the word and chant, “F-I-G-H-T, we don’t fight!”  I think that the best part of this song is the verse because it gives the steps to conflict resolution in very simple, easy to memorize terms.  Here are the lyrics:

The little posters are just sooooo cute, and they illustrate each of the problem solving steps that are listed in the song.  So the song and the posters dovetail together to help the children memorize and visualize the steps easily.  (The 8.5 x 14″ posters are a $4 download here.)  And of course, the movement in the song helps the children to stay focused and happy while they are learning, and activates the neural wiring throughout the whole body.  Research tells us that whatever we learn with our whole body, we are more likely to retain and actually apply later!  I particularly like the idea of increasing the odds of this happening when it comes to self-control, self-regulation, and conflict resolution!  I have them permanently posted in my room at eye level as a daily reminder of what I expect.  I don’t know how much they really notice it any more, but it’s there. 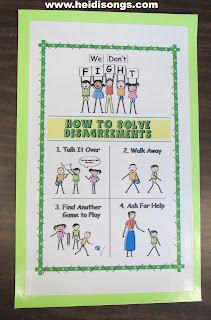 Teaching Kids HOW to Talk It Over Is Also Important!
This week, when a couple of children had an issue, I asked them to talk it over rather than have me come solve it for them.  One of the children, who is a very high achiever, kept insisting that he didn’t know how to talk it over!  After I kept telling him to just go do it, and he said that he didn’t know how, it finally dawned on me that perhaps he was telling me the truth- maybe he really didn‘t know how to talk over a problem with another child! 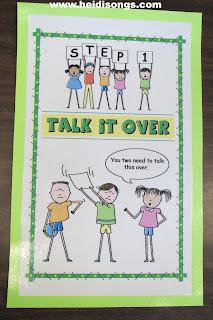 So I led the two children through the steps of talking it over, and then after playtime was over, I gave the whole class a lesson on how to talk over a problem with a friend.  I taught them to say, “Stop.  I don’t like it when you do that because….”  Then the other person could respond by saying, “Okay, I’m sorry!”  Or, perhaps, “Oh, I didn’t mean to bother you.”  Or maybe, “I didn’t know you were playing with that.”  We role played how to do this several times, and many children were disappointed that we ran out of time before they got a chance to try it. 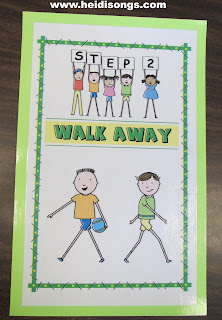 I realized that many children come asking for help solving problems (and tattle!) purely because they want the teacher’s attention, and they want a reason to come talk to the teacher.  So I told them that any time they are able to talk over and solve a problem together, they could come tell me about it and I would be happy to hear the good news.  Otherwise, if there was a problem, I would expect them to try to talk things over FIRST.  Then if that didn’t work out, someone should walk away and find something else to do.  The LAST thing to do would be to come find me to ask for help.  I used the posters each time to remind them of the steps and the order that they should do them in; then I replaced the posters back on the wall. I must say that we have had fewer problems after these lessons!  I have still had about the same amount of children coming to me during playtime, but this time it was to tell me the good news that they had solved problems on their own, rather than to tell me tattletales and to get me to come solve their problems!  Voilá!!!  I LOVED that!!!  It was SO much more positive!

Integrating Technology and Making It Meaningful
I love to integrate technology into any subject, and of course this is no exception.  So here is a new idea that I heard about at a workshop recently that I am eager to try.  I wish I could remember which presenter it was that shared the idea, and where I heard it, but the fact is that I am drawing a blank on both counts, unfortunately!  (If you are reading this and you think you know who it is, please let me know!) 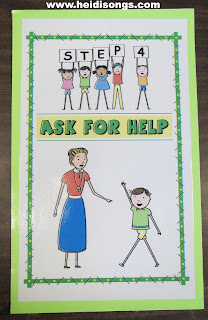 But here is the idea:  She shared that in her preschool class, when she had a couple of children that were having a disagreement, such as trouble sharing a toy, she would intervene and coach them through the steps of conflict resolution.  THEN, she told the children that they were going to show her the RIGHT way to solve the problem, and she was going to video tape them doing it so that she could show the class.  She grabbed her iPad and begin to video tape them as they pretended to have that same disagreement over a toy, but then one child would say something like, “That’s okay, how about if you play with it for a few minutes and then I’ll take a turn?”  Then the other child would say something like, “Okay, let’s do that.”

The presenter said that she saves that video to show the entire class later how the children solved their problem, and praised them lavishly for it!  By projecting the video on the iPad with a VGA adapter, everyone got to see the correct problem solving procedure happen and therefore were able to visualize it, but not the incorrect one unless they were nearby when the problem occurred.   The teacher said that over time, she collected a whole variety of conflict resolution videos that were very meaningful to the children in that class, since they all contained children from the class that they knew. 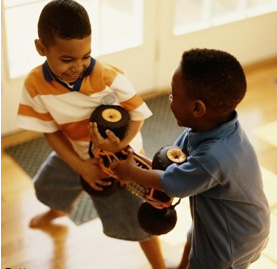 The only danger I can see with this system is that I can imagine that certain children may actually INVENT conflict resolution problems on purpose in order to be videotaped by the teacher and be on a video shown to the whole class!  I would think that if this is happening, the teacher will begin to suspect that the problems are invented, and would need to find a way to avoid this type of negative reinforcement by only videotaping children at random.

The other problem that I can see with this system is that I am always trying to get testing done and that sort of thing while the kids are playing, so I don’t know if I would ever find enough time to get that sort of thing done!!!  Plus once I did this with a couple of children, then EVERYONE would want a turn!   But essentially, the idea of making “social stories” videos with the classroom children starring in their own videos is REALLY a great one!  I just have to figure out how to manage the process so that it will work for me. 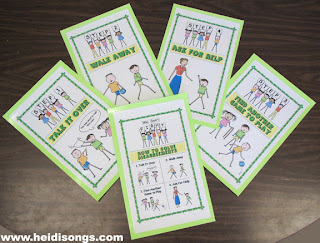 Click here to purchase the visual aids that teach the steps for resolving disagreements.

Here are some more videos from the Classroom Management DVD!