How I Got My Kids to Use Just ONE Pack of Dry Erase Markers ALL YEAR LONG!

What is the best way to manage dry erase markers in the classroom?  After 25 years of teaching, I think I FINALLY figured it out last year!  In the past, I have always had to spend quite a bit of my own money on dry erase markers because my Kindergarten students simply could never seem to be responsible enough to replace the lids and not squish the tips.  So I decided to try a totally different strategy last year, and it worked:  OWNERSHIP. 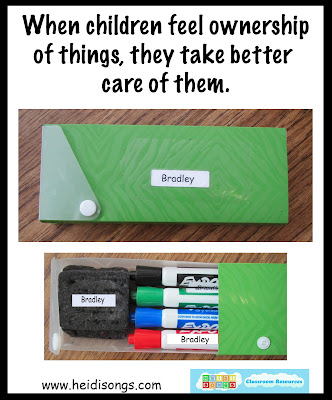 This is what I did:  I announced at our first parent meeting at the beginning of the year that I needed each child to bring in their own personal dry erase markers to use all year.  I told the parents that they should caution their children to be very careful not to pound on them or the tips would become damaged and unusable.  I also told them to tell their children to replace the caps each time they used them, or they would become dried out, and then the PARENT would have to replace them.

Now you may think that your students’ parents will never send in dry erase markers, and I really thought that I would have a hard time also, since I work in a low income, Title One school.  Here are some things that helped:

And yes- I DID get ALL of the parents to send in a pack (or at least a couple) of dry erase markers!  One child only brought in two thin, black markers.  But that was the worst of it. 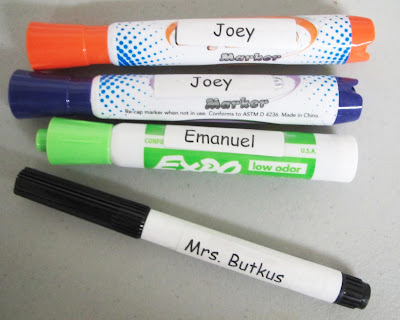 I use return address labels to put names on the markers.  Cover them with tape, too- or it comes off!

Once I got all of the markers in, I printed out the children’s names on return address labels and placed them on markers.  (We cover the labels with tape also just to make sure they stay PUT.)  I already had a set of very small erasers for the children to use.  Last year, I didn’t have names on the erasers, and that was definitely a mistake!  The kids were always mixing them up and arguing over which eraser belonged to whom.  So I would really recommend putting names on your erasers, just to avoid this problem.  It was something that irritated me all year, but never found the time to go back and fix it.

These pencil boxes were just ONE PENNY each at Office Depot in August!

I also put the name labels onto some pencil boxes that I bought at Office Depot for just a penny each!  (They always seem to go on sale for a penny each August, and I snap up as many as I can lay my hands on!)  Eventually, I wound up covering up the names up with clear packing tape, because the children started coloring over their names with the markers, and the tape made it impossible to deface the name permanently. 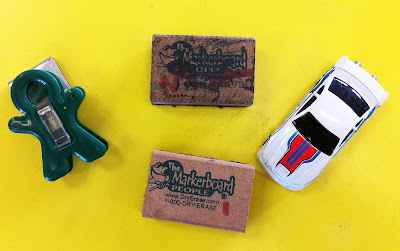 I had almost enough of these small erasers to give my students each one.  They are from DryErase.com.  Unfortunately, a lot of my children did color all over them over the past few years, and I don’t know how to get that off.  They did it when working with volunteers.

No matter how many markers each child brought in, I put only four markers in each child’s box, because only four would fit.  If there were extras, then I saved them with the child’s name on them in one of my closets.

This is how I introduced how to take care of the markers: 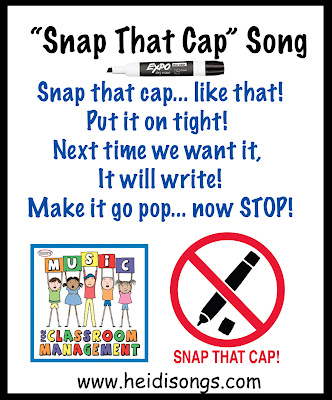 This song is on the Classroom Management CD/DVD.  Each line is sung twice to help kids remember.  It’s fun!

This Wiggles book has a couple of pages that talk about replacing marker caps.  The book is about school procedures in general, such as using just a small amount of glue, putting away our own things, using quiet voices inside, saying “please” and “thank you,” etc.

When I explained that the kids would have to ask their PARENTS for replacement markers if they ruined them, an audible, collective “gasp” went up through the room!  The children stared at each other with wide eyes.  I wondered what would happen next!

So this is what happened when we started using the markers.
Of course, true to form, one little girl immediately smashed the tip of her marker.  She said, “Mrs. Butkus, this marker doesn’t work.  Will you give me a new one?”  I said, “No, but you can ask your dad for one.”  Everyone at the table froze and looked at me and then looked at her.  It was as if they were all waiting to see if I meant what I said!  I did not give it to her, but suggested that she use the other markers in her box and be more careful next time.

Could I really follow through and not replace ruined markers myself?  Well, it was quite EASY to follow through because all of the children had three other markers to use in their boxes!  I didn’t have to give in at all!  They were still able to complete their assignments.  When children saw that I was not replacing ruined markers, and that the result of their irresponsibility was fewer markers to use in comparison to their friends, they became…. CAREFUL with them.  Yes, folks.  They were careful with their markers like I have never seen them be careful with markers ever before!  Just as soon as a lid went missing, they went nuts trying to find it- even if it was in the middle of a lesson!  They were on the floor and looking under their chairs, etc.

We used our dry erase markers a LOT last year!  In fact, we used them constantly.  We used them in small groups for both math and literacy work.  But, I did NOT allow them to get the markers out at playtime.  I did allow this one winter day for two boys that really loved to draw, and by the end of day two, both of their markers were dry… not due to misuse, but due to over-use!  Their parents happily replaced their markers, but after that I had them do their coloring with regular markers and crayons on paper, which I had plenty of. 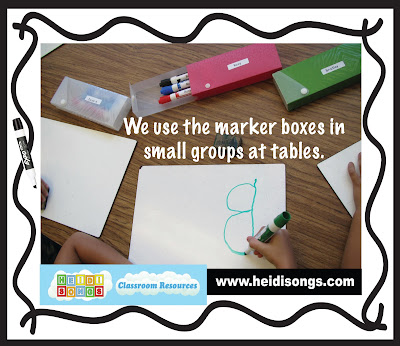 We also used them for whole group activities as well.  One of my favorite things to do with my students is to have them sit and write the sight words as the Sing and Spell the Sight Words DVD’s play, or write the numbers  as the Jumpin’ Numbers DVD’s play! 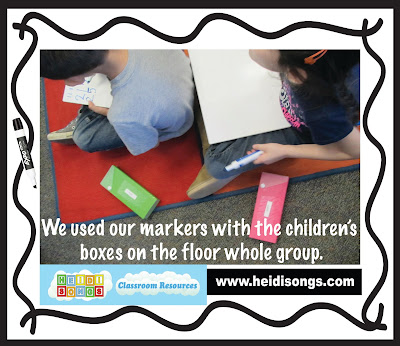 When I originally thought of this plan for managing the dry erase markers, I wondered how I would efficiently pass them out and collect them.  This turned out to be easy; I just put them in colored baskets according to their color groups.  So the children in the red group put their marker boxes in the red basket, the children in the blue group put theirs into the blue basket, etc.  When we used them in small groups, I just placed that basket in the middle of the table and passed them out when I was ready. 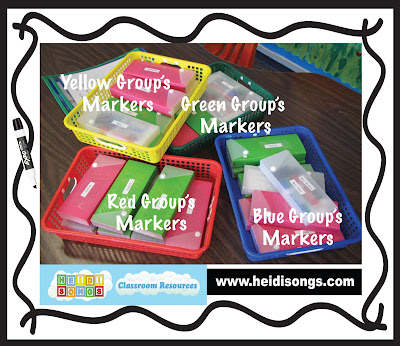 This is how I kept the marker boxes organized by group.  It was very easy to pass them out and collect them.

After spring break, I noticed all of the unused markers in my closet, and decided that the kids may as well use them!  So my aide and I went through the children’s marker boxes and tested them to see which ones were still good and discarded a few.  Then we replaced a few with new ones from their supplies that I kept in my closet.  I had never even used ANY of the markers that the school had provided, so at that point I gave each child that needed one a new marker from the school as well.

There was nothing else I did in particular to contribute to the success of this plan!  When a child moved away, it usually happened without any notice, so he or she left without taking the markers along.  When a new child took his place, I put new name stickers over the tops of the old ones and gave the new child the existing marker box.  The new child seemed to always take his cue from the other children, caring for the markers like they were his or her own.

I thought it was very interesting that when I let the children play with MY dry erase markers at playtime on my big dry erase easel, they went straight back to the regular thing of leaving the caps off and the markers lying around to dry up!  They JUST DIDN’T CARE about taking care of the markers unless they were THEIRS.  Ownership matters- even to five year old children.  And simple economics matters!  There were a lot of dry erase markers in the bag that I got out for them to use at playtime, with lots of bright colors.  There were plenty there for them to let a bunch of them dry up, and still have lots of them left to play with.

I thought that they had proved themselves responsible enough to take care of my markers, but responsibility had nothing to do with it!  If you want children to take care of anything, then give them personal ownership of it, and use economics to your advantage by restricting the supply and increasing the demand.  Does that make sense?

If you enjoyed this blog, be sure to sign up for either the email updates at the top right of this page, or follow me on Bloglovin or another type of blog reader!  And follow me on Pinterest for lots of great ideas daily!