Ideas For Christmas Programs for K-3 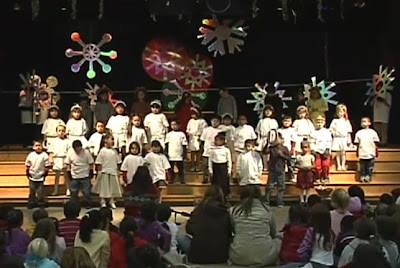 Over the years, I have done lots of fun things with my class for Christmas programs. My favorites are my two musicals, The Gingerbread Man and The Mitten. I usually rotate them each year for my class to do. These plays are on my website, along with some little video clips of them from my class. But there are some other songs I have done that are less of “A Production” but still lots of fun.

We loved doing “Rockin’ Around the Christmas Tree” a couple of years in a row. I found the music on a Christmas CD that I already had at home. We had a mom in our class paint some cardboard cutouts and made come Christmas trees for a few of the kids to hold. There was a hole for the face. We divided the kids into groups of 7-8 and had them form circles. Then we picked a child to be the Dancing Christmas Tree, and put that child in the middle of the circle. That child was supposed to bounce and dance as the children circled around him or her. When we came to the chorus, I made up a few little motions that all of the kids would do. Then we all got up and circled around again. There is an instrumental section in the middle of the song. At that point, all of the kids would crouch down on their knees, and clap in time to the music while the Dancing Christmas Tree would remain standing up and dance around a bit more during this part. It was his or her turn to be the “star” of the show until the instrumental section was finished, and then we picked it up again with the chorus or the circling, depending on the music. The kids and the parents loved it, and it was so easy!

We have also had the kids shake shakers to Feliz Navidad. We had a Spanish speaking child sing the words in Spanish into a microphone. Everyone else sang too, but it was this child’s chance to shine. Later in the year, we did the same thing with “La Bamba.” We added some little motions that the kids did with the shakers in their hands.

“The Shoemaker” is a fun song to do with rhythm sticks, if you are brave enough. I think it is on the album, Fun Activities for Fine Motor Skills. I am not sure if the teacher I used to work with made up the motions or if they are included on the album. I’m sure anyone could make some up, though. It’s a cute song, and it is purely instrumental, so there are no words to remember.

We love to sing the 12 Days of Christmas song, too! Someone I worked with years ago taught me some simple and silly motions to go with it, and it worked like a charm to help the kids remember. The motions make it such a silly song that it is always a hit with the parents, since they love to see their children “ham it up.”

On the first day of Christmas, my true love gave to me:(hold up one finger for one, two for two, etc.)
A partridge in a pear tree.(strike a silly sideways tree pose. It almost looks like an Egyptian pose.)
2 turtle doves(fly like a bird with arms extended)
3 French hens(flap your wings with hands tucked into arm pits, like a duck)
4 Calling birds(place hands around mouth and shout this line)
5 Golden Rings(place hands in an “O” over your head)
6 Geese a-laying(after saying the word “laying” we simultaneously squat, flap wings once and say “honk!”)
7 Swans a-swimming(pretend to swim, doing the breast stroke)
8 Maids a-milking(pretend to milk a cow)
9 Ladies dancing(put hands over head in an O and twirl around once)
10 Lords a-leaping(turn sideways and jump up on the word, leaping. We pull our legs up in a funny way when we leap.)
11 Pipers Piping(pretend to play a flute or clarinet)
12 Drummers drumming(play a drum)

Now to make this even more dramatic, when we get to number 12, I have them drag it out very slowly until we start counting down. Once we start down from 12, we go SUPER FAST and that makes the parents laugh. When we get to Five Golden Rings, we suddenly go really slow and then freeze. Then everyone waits for me to restart them, and then we go super fast down from four to one. Such fun!