Does your early childhood class include a rest or naptime?  If so, do you know the best way to manage it to increase the chances that the children (and YOU) will get a chance to rest your minds and bodies?  Read on to find out how I managed rest time in my kindergarten classroom- (waaaay back when we were allowed to have one!) 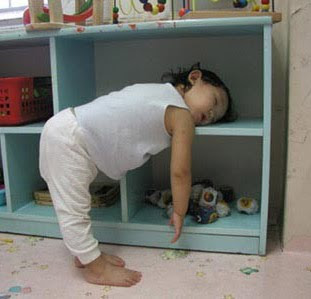 If you have a very long day in Kindergarten, you may choose to include a rest or nap time.  And most preschools that run all day do include a nap time as well!  When I taught full day Kindergarten, it was obvious that the children needed to rest in the afternoon in order to make it through the day.  And I was CERTAIN that I needed one!  But I soon discovered that having some definite rules in place regarding our rest time was essential to make it run smoothly.
To get started, EVERYONE (and I mean EVERYONE) was expected to get a drink and go to the bathroom before we started. If they asked me later, the answer was a definite NO during our rest time.  Otherwise, there were always children asking to go to the restroom, and children playing in it when they were supposed to be resting.  It was a bit chaotic while they got their drinks and went to the bathroom, but I put a time limit on it. (It also goes faster if they all have water bottles somewhere in the classroom. My class has water bottles in colored tubs around the room, so that they can find their own quickly and not have to wait in line to get a drink.  See the picture below for more info.)

If they weren’t done preparing for rest time in five minutes, (getting drinks and going to the bathroom, etc.) then they had to give up that much time of their playtime, which followed immediately. I also put tubs of books within reach of all of the children. I taught them to get the tubs of books out and put them in specific places.

Keeping books in tubs, and then distributing the tubs around the room within reach of the nap mats is a great way to give children that are not tired something useful to do.

We had assigned spots for their mats. They had to put their mats in their assigned spots, no matter what. Friends were separated. During rest time, no one was EVER allowed to get up, no matter what. They all had books within reach. I put books on tape on, or maybe CD’s. The books on tape (with no one holding the book up for to see the pictures) worked better than anything else, especially if I read them the book and showed them the pictures previously.  In fact, playing a story on tape seemed to put the children to SLEEP better than anything!

If you put on music that the children usually do movements to, they will probably not feel restful during rest time!  These kids are singing the “To” spelling song from Sing and Spell Vol. 1.

I found that playing active types of songs (the ones that they know movements to) did not work well for rest time, so I really couldn’t use ANY of my own music! Lullabies worked well. I set the timer for 20 minutes, and then no one could talk or get up and move around unless the place was on fire or they were deathly ill.  In fact, if they got up at all, and were not ill, they had to give me five minutes of their playtime.  I had to be very strict at the beginning with this, and I don’t know who hated it more- the kids or myself!  But it paid off in the end:  the children all knew that I meant what I said.  No talking, no getting up, no asking me if it was almost time to get up, etc.  Period.
Later on in the year, I duplicated a bunch of random “fun” worksheets with dot-to-dots, etc., and also gave any that wanted one a clipboard and a baggie with some old crayons in it, and a pencil. They were allowed to get only ONE worksheet, and then color on the back when they were done. Or, they could get blank paper. Lots of kids really liked the blank paper best!

Children that have outgrown the need for a nap may prefer to read or draw while the others rest.

Even later in the year, we switched to journaling time on the rest mats during this rest time. Again, everyone had a clipboard (I bought them cheap at Sam’s club), their journal, and a bag of crayons, a pencil, and an eraser. I just kept a class set of these things for the kids to use only during this time. They were not allowed to get up or get a drink, or go to the bathroom, etc. If they asked me a question, I told them that I was not allowed to answer during rest time- the principal would be mad at me if I did! (They of course, believed this!).  I told them that I wasn’t allowed to spell for children after lunch time.

I made sure to NEVER answer a question from anyone during rest time, or even acknowledge their pretty pictures or work with a nod! I didn’t want them to be trying to get my attention at all, so that I could have 20 minutes of peace. Consistency really paid off. Anyone that was talking or getting up, etc., during rest time, had to sit in time out for the first five minutes of their inside playtime, which followed immediately afterwards. This piece of the puzzle is very important!

I want to emphasize that our play time was right after the rest time.  That way, if someone fell asleep, they “only” missed their play time after that.  The children just learned to step over them!  Most of the true napping really ended by Thanksgiving, and by Christmas, only the youngest of the children almost ever fell asleep.  Also, if anyone refused to comply with my rest time rules, I took away bits of their play time in chunks of five minutes at a time.  You could also do two or three minutes at a time.  The kids really don’t know any difference! You just want a consequence that they care about, and still be able to give them some of the play time that they obviously need.

A visual indicator of how many times they lost those chunks of time is helpful to the persistent ones- like a chain with links, for example, that grows each time the child keeps getting up.  Then I would remind the children as they sat there, “Now we are sitting for another five minutes because you ______.

I modeled my expectations during this time very clearly with my kids at the beginning of the year. We acted out the various scenarios and what would happen to those the followed my rules and those that did not. This helped a great deal. But the most important thing is to be consistent! And make sure you have assigned spots for rest time. Separating those best friends is very important.
Good luck!