My Review of Talk Blocks from Learning Resources 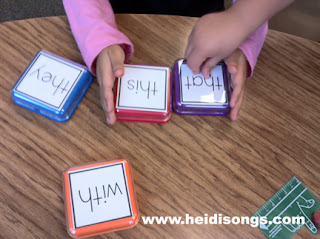 I was excited to be given a set of these Talk Blocks to try out and review about a month ago by the good folks at Learning Resources! Talk Blocks are blocks with a removable cover and a little recorder inside, so that you can record anything you want on it! Then, all you have to do is push the button and listen to it! 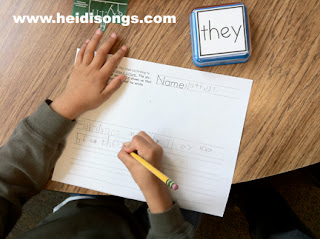 I decided to use my Talk Blocks for language arts instruction; specifically, I used them at the writing table as a supplement to my word wall! I just printed out some words that the children were likely to need, and cut them to the correct size of the top of the block. Then I recorded my voice saying the word by changing the slider button in the back to “record” and pressing the button down. You continue to hold the button down as you speak, and then let go when you are finished. Then slide the button back again to “play” and then listen to your recording! If you like it, you’re done! If not, then just slide that button back to “record” and try it again! No erasing needed; the recording automatically erases when somebody slides to button back to “record.” 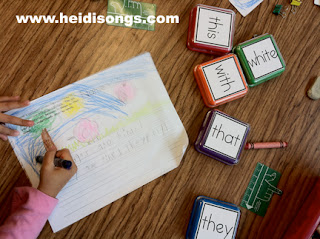 My kids really LOVED to record their own voices, so I had the whole class say the word that I had written on the top of the blog! Then we all listened to it to check and see if it was alright. The only thing I found out that was necessary was to cover the slider button on the bottom with duct tape, because if the students start to “explore” the unit and sliding buttons around, the recording is instantly erased! I found this out the HARD way, LOL! 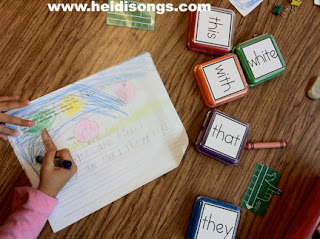 We used the Talk Blocks for several different lessons, but my favorite use so far was in conjunction with a writing project. I recorded and wrote on the tops of the blocks several words that I thought would be useful for the children, and laid them out on the table and let them use the Talk Blocks in conjunction with the Word Wall. If they weren’t able to tell the difference between the words “they” and “that,” for example, they could press the button on the Talk Block and listen to the word! Lots of children used the blocks for this purpose, and it really did help them complete their writing.
In case you are interested in the lesson that they were doing, we first read a non-fiction book about flamingos.  Then we made a list of things that we learned about them, and I taught them how to draw the flamingos in their journals.  The next day in small groups, I had them write a “big idea sentence” to get themselves started in writing about flamingos, such as, “I like flamingos,” or “Flamingos are birds,” or “Flamingos are cool.”  Then they had to write at least two more “little idea sentences (or detail sentences) regarding something they had learned about flamingos.  This lesson follows the “Step Up to Writing” format that we are using in my district.  When I modeled what to do, I also marked my topic sentence with a green dot, and the supporting sentences with a yellow dot.  This is supposed to help the children organize their writing.
The idea of starting with a “big idea” rather than a supporting idea can be a tricky on one for the little ones, and I often had to help them erase and restart their little paragraphs, unfortunately.  My high group got it right away, other than being rather distracted from the task and preferring to talk and push the buttons on the blocks instead!  So I took away the blocks until they were needed and then gave them back when the time was right. 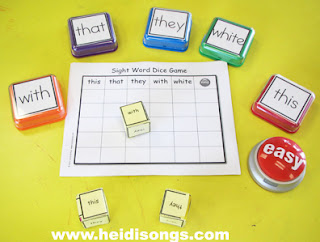 I also created a Sight Word Dice game, and had them roll a sight word, push the button, and color in a box for each time they rolled the word!  They had a good time with it, but on that particular day, my class was very rowdy and would not cooperate with playing the game nicely and sharing the blocks, so they unfortunately had to be taken away from some groups. 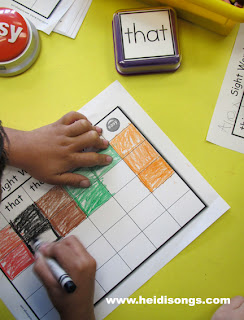 We also used the buttons to record the children cheering, and then let them press the button when they turn in their homework for the week! It’s very motivational, and the uses are really only limited by your own imagination. But watch out! To keep the noise level low, just make sure that your recordings are a bit “soft spoken,” because if you have the children all shout something, then it will be recorded and play back VERY LOUD!!!!! 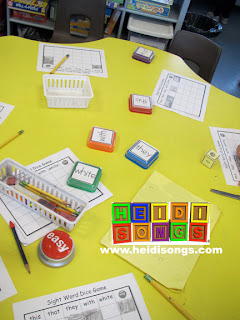 I think that these blocks could also be used for dictation practice in a learning center.  You could record some sentences and have the children try to write them exactly as they hear them.  They could also be used to record the directions for a learning center, so that the children could hear the directions that they cannot read!  They could also be used for reminding kids of letter sounds, or the name of a number, etc.  Basically, you are really only limited by your imagination here!  Really, the only drawback to them is that the children just LOVE to push those buttons, and so they may choose to continually push the button rather than complete their work.  If so, you will probably hear it in the classroom and will need to have them bring you the block so that you can remove it.
This is a nice tool to have in your classroom or home school! The children love it and it’s a fun addition to nearly any lesson. Just remember to save some money for batteries, because each Talk Block needs THREE AAA batteries! And because of that, I always turn the buttons to “off” when we are not using them.

These Talk Blocks record and play back 30 seconds of sound. With a removable clear top you can create pictures, symbols, numbers or letters to match your recording. The large size is ideal for young children.

By the way, Are you interested in applying for a Grant for a Now! Board from Learning Resources?

Learning Resources announces the sponsorship of a teacher grant hosted by WeAreTeachers. To apply, teachers must answer this question: “How would you use portable interactive technology to create collaborative lessons?” After the application process concludes, educators can invite colleagues to vote for their favorite lesson ideas. Each of the three top vote getters will win a set of three Now!Boards and three GeoSafari Tuff Cams, a prize package valued at $2,000. (The Tuff Cam is a video camera that is sturdy enough for little hands to use without fear of breakage from drops, etc.!)  Additionally, two merit-based winners selected by a panel of teachers will each win one now!Board and one GeoSafari Tuff Cam, a total value of $700. Teachers can apply for the grant online through May 22, 2012.

For more information and to apply for the grant, visit this link.