Our Last Day of School: FINALLY… and… The Wide Mouthed Frog Blog! 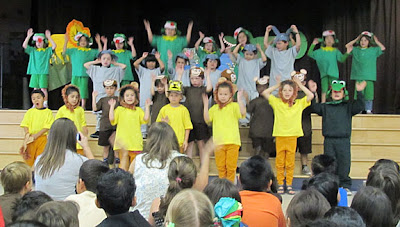 We finally had our last day of school this week on Thursday!  This has been the nicest group of children that I have had in a long time, and as ready as I am for a summer break, it is going to be hard to let them go and start over again in September!  It has been a while since I have been tempted to ask my administrators to loop from Kinder to first grade with a group of students, but this has definitely been one of those groups of kids that I could keep and go on with next year.  Anyway, the teachers at my school don’t generally loop with their students from Kinder to first, so it seems unlikely that this would ever happen.

1.  Our Wide Mouthed Frog Play – and Tips for Making Any Class Play Better

We did our class play last week on June 2nd, the Wide Mouthed Frog, and it was a great success!  The children outdid themselves in “cuteness,” if I do say so myself!  And since it was my second time through putting on this particular play, I was able to fine tune a few things, and so I thought I might share some of these items with you here today, just in case any of you will be putting on the play yourselves in the future. 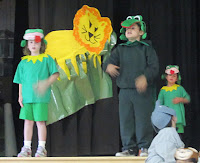 *  One thing that I had trouble with last year and this year while putting on this play was getting the children to sing along with the characters on the stage when it wasn’t their turn to be the “stars.”  I wanted them to be singing and doing the movements while seated, and what I was getting was not much more than a couple of children singing and the rest just watching the kids on the stage.  I was thinking that part of the problem could be that some of the motions for the songs really couldn’t be done very well while seated.  So I taught the children some other motions to do while seated when the baby froggies were doing the Hopping Along song.  Adding some “seated motions” and showing them how to do those movements while seated seemed to be the key to getting them to participate more while waiting for their turn to be featured on the stage. 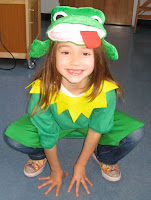 *  Watch out for possible increases in class size when you are making your costumes the first year that you do the play.  Last year, I had a class of 24, but this year, I have 28.  This left me scrambling to find extra hats, shirts, tails, and sweatpants, etc., and it was incredibly stressful!  Luckily, last year I had anticipated some of this and purchased six of each of the elephant and monkey hats.  BUT… last year a nice grandmother made me the lion hats, and only made the five hats that I needed.  This year, when I went to make another, there were not even any extra supplies to make more of those hats in the box, and the fringe was a very unusual color.    This left one little boy with a totally different hat that he was not entirely comfortable with, and I felt bad about that.  So when you buy supplies for things like that, make sure that you buy some extra to have on hand just in case you wind up with more students than you planned on!

*  I think my students would have done better if we had done a dress rehearsal in our costumes, and had a chance to try the play for a smaller audience first, such as just the rest of the Kindergarten classes.  We had our auditorium jam-packed and totally full of children and adults for our first performance, and some of the children resembled a deer in headlights!  But the second time they did it, they seemed much more relaxed and looked like they were having fun with it.  It made me wish that they had gotten rid of their stage fright before showing off all of our hard work to the rest of the school.  Plus, they were all so excited about being in their costumes that they were having a hard time concentrating. 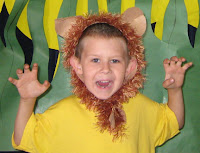 *  Do a sound check before starting!  (Duh!)  I should know better, having sung at church and done dozens (or maybe hundreds) of sound checks in my life time.  Apparently, the people at the back of the auditorium couldn’t hear my narration very well.  But I was anxious to get started, and it sounded so LOUD from where I was sitting!  Just remember though, when the room is packed with people, they are going to absorb a lot of the sound, and then also make some sounds themselves (especially when most of those people are children).  So things like the narration have to be all the louder and clearer.

All in all, I would say that I just LOVE this play!   It is easy to put on- much easier than the Gingerbread Man or the Mitten, because there is less stage direction to give and therefore less to mess up.  The kids all seemed to feel special and enjoy their parts.  It always seems to work out well to have a bunch of well behaved little girls take the parts of the baby frogs, and have a very smart little girl play the Mother Frog.  I had one of my top students play the Mother Frog both this year and last, and both girls did it with no trouble whatsoever!  And there really is a LOT to remember in order to play that part!  The crocodile is always cute and steals the show.  And the songs are very EASY to learn.  This play is definitely my favorite of the three plays that I have written!  Love it!

We made a Wide Mouthed Frog Puppet on the day of our play, and it was really fun!  The children absolutely LOVED making their frogs sing and talk; they were SO excited!  I would definitely do it again!  I am sharing the pattern with you today as a free download.

After we put on this play, I found myself starting up this song spontaneously when kids were talking out of turn, and all of the kids would join in!  It’s just a snippet from the Finale of the play, but it works great as a reminder for the kids to just STOP talking!  And it’s kind of fun when everyone joins in on the reminder.

On the day of our play, I needed an extra activity for our special Froggy Themed rotation, so I decided to create a sight word game much like the ones that I made for Christmas, Thanksgiving, and in January with the Snowmen. I decided that we would play Memory with the words, and this actually didn’t work out very well because the words I printed on the frogs turned out to be too challenging for the bottom half the class, since I was trying to have them read some of the “ow” and “ou” spelling pattern words from our Sounds Fun cards, and we hadn’t had enough time to prepare for the game by working on the words.  I think that the problem was that they were using up most of their “brain power” on trying to decode those new words rather than remembering where the other matching word was in the Memory game.  So in the free download I am giving you today, I have changed the words to the sight words included on Sing and Spell Vol. 4.

In any case, this is how you play the game:
Mix up the cards and place them face UP on the table, keeping the fly card separate.  Have the children cover their eyes while you hide the fly card under one of the frog word cards.  The children must all chant, “Froggy, froggy!  My, oh, my!  Froggy, froggy, where’s that fly?”  Then a child attempts to read a word on one of the frog cards.  After identifying a word, then he or she may lift up that word to see if the fly is underneath it.  If it is, then that child is a winner and gets a piece of cereal or the treat of your choice.  If not, play continues until the fly is found.
You may want to consider reducing the amount of cards that they have to choose from if the number seems a bit overwhelming.  And of course, I have included some blank cards at the end of the game for you so that you can change the words as you like
Have fun!