S.T.E.M. Projects in Kindergarten Are SO Much Fun! 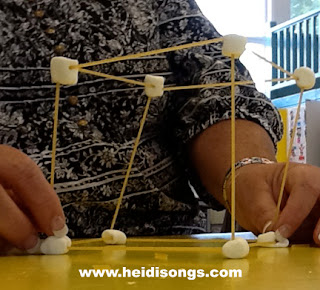 About a year ago, it was suggested to me by my supervisor at Staff Development for Educators (SDE) that I try to develop some STEM projects for my class and try to include them in some of the sessions that I present at their conferences.  (For a complete list of my upcoming presentations, please click here!)  My first thought was, “Uh… why would I want to teach about stem cells in Kindergarten?” And then my next question was, “What is STEM?”  (Unfortunately, this only revealed my own ignorance in the subject, LOL!)  For those of you that are still in the dark regarding this topic like I was, the term “STEM” in relation to edu-speak refers to projects that integrate all four of these subjects:  science, technology, engineering, and math.  Hence the term, STEM!  So for the purpose of this blog post, this discussion has NOTHING to do with stem cells at all, thankfully!  And as far as the “engineering” part of it is concerned, all the children have to do is simply build something.  SO…, in this project, they would need to use the scientific method, and perhaps hypothesize, predict, conclude, etc.  They would need to use technology in it somehow, such as a camera, iPad, document camera, etc.  They would need to build something, or try to “invent” something.  And then they would need to use their math skills somehow, by counting, estimating, sorting, dividing (sharing equally), etc.  According to SDE, there is grant money out there for teachers that create STEM projects!  Hmm, very interesting!!!  Now I just need to figure out where to apply for it!!!! Some of the children made VERY large cubes!

A school project that integrates science, technology, engineering, and math is very often a project that takes time and is spread out over a good week or two, at least in the higher grades.  The thing that I don’t like about this approach in Kindergarten is that it just seems to me that the more you spread a project out over several days, the more abstract it becomes to their little minds.  For young children, I prefer projects that can be started and completed in just one sitting.  So when I saw the idea for this project on the Science Sparks blog, it occurred to me that with just a few tweaks, this could qualify as a STEM project that could be completed in one day, so I was excited to try it! 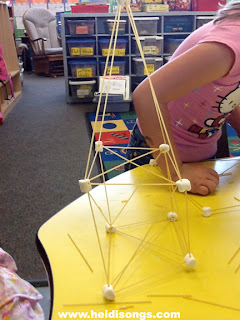 One student made this fabulous house! She told me that it was the
“Leaning Tower of Pisa!”  LOL!

To give it a try, all I did was buy a large bag of mini marshmallows and a medium sized bag of spaghetti noodles.  Actually, when I was at the grocery store, I was afraid that I would run out, so I bought two bags of marshmallows.  It turned out that one large bag of marshmallows and the smallest available bag of spaghetti noodles would have been plenty for 24 children.  I also let the kids eat five mini marshmallows each, in addition to creating their structures, and we still didn’t quite use up all of them!  So I decided that we could do the project twice, and we STILL didn’t use up all of the noodles!

Another child made this structure that resembles a pyramid.

On the first try, I made one marshmallow and spaghetti “house” ahead of time and showed the children my sample.  Then I got out my document camera and made a cube underneath it so that everyone could see what I was doing and how I did it.  We talked about how to make it sturdier, and how builders make houses so that they will stay up.  (It’s the diagonal posts in the structure that make it sturdy!)  Once I added some diagonal spaghetti noodles to my cube, the whole thing stayed up straight and tall with no problem.  Then we counted how many marshmallows we needed to make a cube, and discovered that we only needed eight.  I think that this is a good precursor for them to start counting the vertices (corners) in the geometric solids, which I know is something that they will have to be able to do in the higher grades.  Despite the fact that I modeled how to make a cube, I told them that they could explore the materials and make anything that they wanted.  When they were finished, I gave them a lunch bag with their name on it so that they could save their structures and eat them at recess or lunch.  It’s also worth mentioning that this project creates a BIG mess, and you WILL need a broom to clean up all of those broken spaghetti noodles that land on the floor!  It really looked like a bomb with dried spaghetti inside of it exploded inside my classroom around the table for this project! 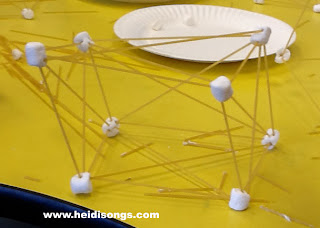 Here is a cube that a child made with some diagonals for strength.

The second time we did it, I gave them the assignment to make a cube.  I asked them to predict how many marshmallows it would take to make a cube, and they took a few guesses.  (There’s the science bit!) Then I modeled how to construct one, but told them that they could do it in any way that they wanted.  (Building is the engineering part!)  We counted the number of marshmallows that my cube required.  (There’s the math part, along with the geometry of the cube.)  Then I told them that they were allowed to make anything that they wanted, but if they made a cube, I would let them take a picture of it with the iPad!  (There’s the technology part!)  Then I turned them loose and let them try it.  Luckily, there was a wonderful retired teacher volunteering  there with them, so that really helped, especially with the picture taking part! 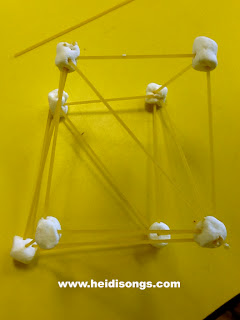 This is my sample cube, made with diagonals for strength.

My wonderful volunteer also gave me some insight afterwards on the techniques and struggles of the children.  As I have observed many times before when we have made clay objects, you can get an entirely different view of the children when you give them a creative assignment such as this!  One of my highest functioning students informed me after I gave the directions that he didn’t want to do this!  I was a little surprised, because he is so successful at everything he does!  But the volunteer told me that he simply gave up in the middle of the activity.  Yet another little boy who struggles in some subjects really excelled in this project!  He gave it some thought and decided to give his cube double walls of spaghetti to make them extra sturdy, and then ALSO add the diagonal posts required to make it strong.  Then he used extra marshmallows on it to make sure that all of the extra pieces of spaghetti would stay put!  WOW.  I am guessing that THIS is why there are grants out there for teachers to develop STEM projects; to encourage and develop the talents of students like this!  Here is a child that can think outside of the box and keep trying things until he gets it right.  Bravo!  But how would I have ever known that he had those skills without a project like this?  Especially since this particular child doesn’t always excel in language arts and usually does average work in math? 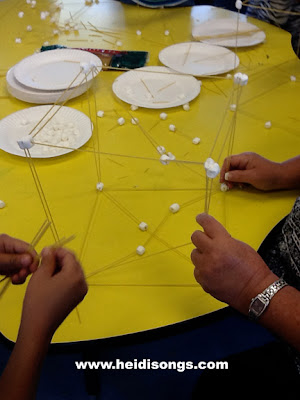 This is the large cube made with double walled spaghetti noodles, diagonals, and extra marshmallows for strength!  A Kindergarten student did this all by himself.

One of my youngest, shyest little girls made nothing at all on the first round; she just said that she couldn’t.  On the second round, she worked very hard, and made a square!  It was not a cube, but a flat, one dimensional square.  But considering that on the first try she just basically explored the materials and constructed nothing, I was satisfied with that!  Besides, my volunteer told me that she had worked very hard to make that square!  So we have to consider that she did show some growth in her attempts to improve. 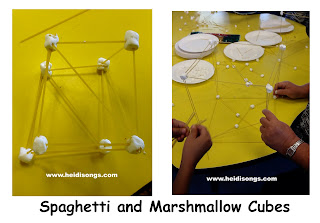 Each time we did this, one of my students asked me if it were possible to make a sphere.  This led to an interesting discussion about why this wouldn’t be possible.  I pointed out that every piece of spaghetti was straight, and that a sphere was round all over.  Plus, if you bend the spaghetti very much, it will break!  I did, however, get out one of my interesting balls from my ball box, which is known as a Hoberman Sphere.  It is a sphere made out of straight sticks, and it can collapse and expand.  Sometimes I throw it to a child that is really paying attention, as a motivator to the other children to try a little harder.  But I guess that we had never before discussed that this is actually a sphere made out of straight sticks!  In any case, I told the children that it would be possible to create a sphere out of straight sticks and marshmallows, but it would take a LOT of work, and it probably wouldn’t be possible in the amount of time that we had! 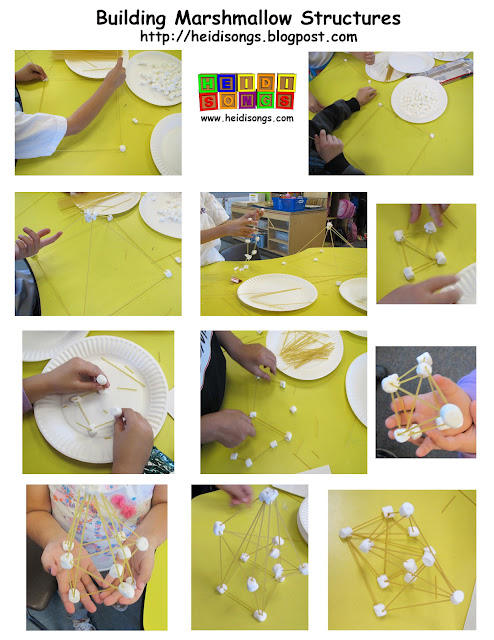 These are some pictures from our first attempt at making marshmallow structures!

I loved the results of this activity!  I would love to think of some more STEM activities that are Kindergarten appropriate!  Do you know of any?  I did find one Kindergarten STEM site with lots of activities on it, but I would like to find more.  Can you share them by leaving a comment?  (I love comments!!!)  Thanks!