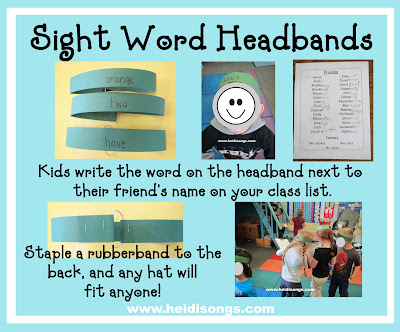 Today I am going to tell you about a very simple and fun idea that my class really enjoyed!  It’s called Sight Word Headbands, and you do it in a whole group setting, so it is really easy to manage. 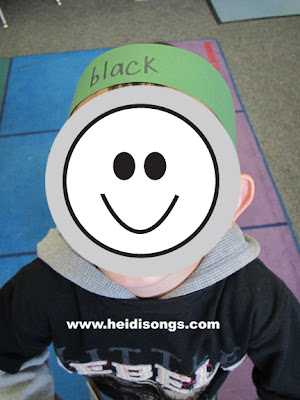 I saw a similar idea on Pinterest, where the teacher had the kids lick their foreheads and stick a flash card on it.  The card apparently sticks there until the activity is finished.  The children were to draw a line from their friend’s name to the sight word.  (Follow the link above to the exact pin.) 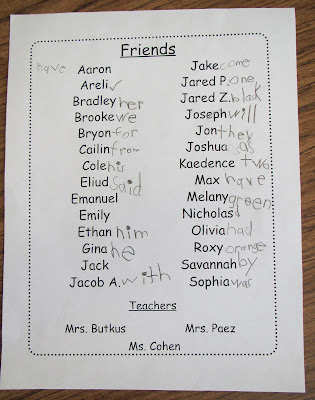 I already had this list of names typed up, so I just told them to write the word next to their friends’ names.
I really didn’t want to have the kids sticking my cards to their heads with spittle, and I couldn’t imagine that the cards would stick very long.  I also wanted them to write the words instead of draw a line.  AND, I already had a list of their names printed out that I wanted to take advantage of.  (This list is in their journaling baskets in page protectors, just in case they want to write about each other.)

The 18″ band has a three inch extender stapled to it, and a rubber band stapled on the ends so it will fit any child that grabs it.


So I decided to tweak the activity a bit.  I cut a piece of construction paper the long way, 18 inches by 1.5, and then folded the ends of it around a rubber band and stapled it.  It turned out to be too short for the kids’ heads, (thankfully I tried it on ONE kid’s head before making a bunch,) so I added a three inch piece of paper to the end to extend it.  Then I stapled the rubber band to the end as shown in the picture.  You just fold the end of the paper about a half an inch or so and then slip the rubber band inside the fold, and staple.  Do that to both ends.

This worked out great, because the children were able to grab any headband and slip it on.  It fit anyone in the classroom.  Two headbands did rip by the end of the activity, but I think if I had laminated them first, that probably wouldn’t have happened.  I probably could have just put some packing tape on the ends, too, for strength.  The two boys that ripped their headbands tend to be a bit rough/clumsy with their things anyway, so I wasn’t surprised.  It was easy to make new ones or tape them back up anyway. 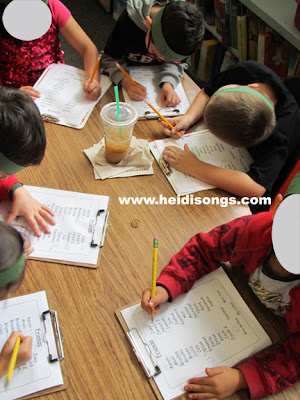 Some children sat at tables, and others wandered around.


To do the activity, I passed out clipboards, pencils and gave everyone a paper.  I also set a timer and told them to keep writing words until the timer went off, or they had a word written by every single child’s name.  The children enjoyed this activity quite a bit!  I think it was nice that they got to get up and wander around the room a bit while doing their work. 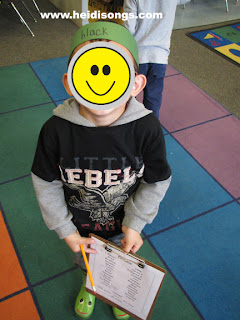 The children were excited and kept showing me how many words they had.  Only one child said that she really didn’t want to do it, and asked if she could play instead.  Oh well!  You can’t blame her for trying!

For some more sight word reinforcement, check out my Sing & Spell the Sight Words DVD and CD collection!! Below are some of the videos from the animated version of the DVDs!