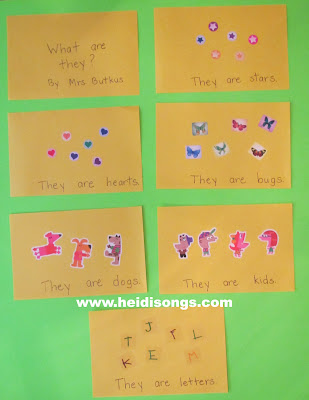 This year, I had the usual amount of “reluctant writers” that really didn’t want to risk trying to write anything new for fear of making a mistake.  So I tried to come up with some new ways to motivate them to write sentences with the sight words that they needed to work on, and also include some words that they would have to sound out and spell phonetically. 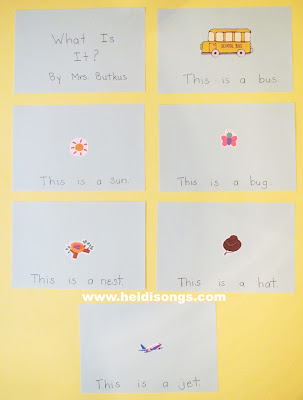 One of these motivational techniques that I came up with was to have the children make books using stickers as the pictures!  Most kids just LOVE stickers, so I assumed that this would be a good activity for my kids.  We did this last February or March, as I recall. 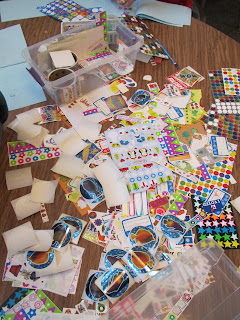 Last year, a teacher retired and left a big box of stickers in the teacher lounge up for grabs.  Guess who took it????

This was the activity:

1.  I made an example of what a Sight Word Sticker Book might look like.
2.  I gave the children blank books that I prepared ahead of time, all stapled together and ready to go.
3.  I spread a bunch of stickers out on the table, and gave everyone a pencil.
4.  I read my example book to the children.
5.  I gave the children the directions, which were:
a.  They must stick to the sentence pattern that I had set, such as
“This is a ______.” 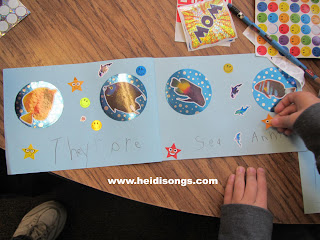 This little guy got “a little” carried away with the stickers, LOL! 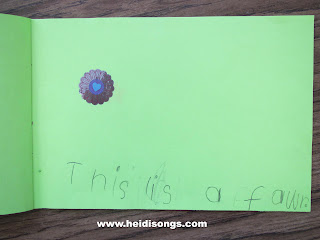 One student tried to write, “This is a flower.”

c.  They would not get a new sticker until they finished writing about the previous sticker.  So, in order to get a second sticker, then the first sentence must be complete.

This all worked great, except that our schedule got a little bit off, and my substitute wound up beginning this activity for me, and then I picked up where she left off and finished it with my class the next day.  She was either unable to get some of the kids to follow the directions, or didn’t understand them herself, because when I got back the next day, many of the children simply filled the book with stickers and barely wrote a thing!

And of course, I had to try to get them to finish, ANYWAY, and they went right back to their same old routine of dragging their feet! 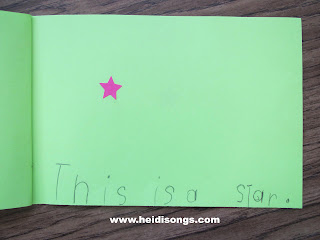 Sooooo, I decided to give it a go and try it again, and this time do it myself.  And it worked- just like I thought it would!  The kids caught on right away, and they were totally motivated to write about the new words that they found in the stickers.  They also were using the sight words that I asked them to use, and as usual there was a lot of singing of the sight word songs while they were writing!  That always makes me smile!  I had given them a six page book to work on, and some of them finished the whole thing in one day and asked to do another!  Other children only finished a few pages and needed to finish the next day.

BUT… next time I do it, I am going to really limit the types of stickers that I put out, and try to get them to stick to certain themes that we are studying, such as sea animals or zoo animals, etc.  AND, I am going to keep all of the stickers in my lap so that they have to ask ME for the stickers each time they think that they are ready for them!  Once they were in the habit of helping themselves to the stickers, it was mighty hard to break them of that habit, LOL!  So with some of the groups, I had to remove the stickers from the middle of the table and make them show me their finished page and ask me for another.  In addition, some of the children probably would have been happier with a four page book than a six page book, so I probably would differentiate instruction a bit by changing the amount of pages that I give each child, or simply let each child do as many pages as time permits and then staple them together when the time is up. 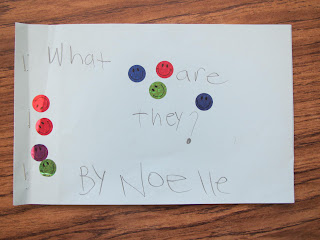 One really fun element of this activity was that when the children finished a book, I tried to find the time to grab my iPad and video tape them reading it to me!  Then the children would get to watch themselves reading it.  I zoomed in on the book so that we would be able to see the text well in the video, and asked the children to point at the words as they read them.  Some of the children really worked hard to get their reading just right for their videos, asking to re-read their books two or three times!  So we would delete the previous video and we would try again.  When we ran out of time to videotape someone’s book, I let them do it at playtime. 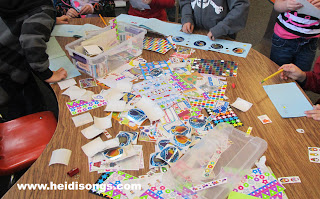 It looked a bit like a sticker bomb exploded in my classroom!

I tried to teach one of my high students to videotape the others, and he pretty much got it- but they really wanted to read it just for ME!!!  Plus, he wasn’t able to hold the iPad very steady and kept cutting off half of the page!  So that didn’t work so well.  I think that if I set up the iPad ahead of time and mounted it on something so that it was positioned just right, though, it would have worked better for those that were willing to read the book without me present.  (Is there such a thing as a tripod for an iPad???)  Overall, watching themselves read the book was a GREAT exercise in fluency for them and highly motivational, and I highly recommend it!

If you know of any other activities to motivate reluctant writers, I would love to hear them!  Please let me a comment below.