Here’s an idea I had for sight words using those pencil boxes with the slide out tray, available at Office Depot and other office supply stores. I was going to put the plastic letters for one word in the box, write the word on the top of the box, and then the kids could build the word together. Well, I decided to use Sight Word String-Ups in the boxes! If you haven’t seen Sight Word String-Ups yet, go to ReallyGoodStuff.com or Amazon.com. They are plastic letters with a hole in them for stringing words, but instead of strings, which are hard to manipulate and tangle up a lot, they use pipe cleaners. The hole in the letters is large enough for the pipe cleaners to go through. (The kit comes with 4 trays, word cards, and about 260 letters.) I figured that I would use those letters in my pencil boxes, and put a pipe cleaner in there with them. 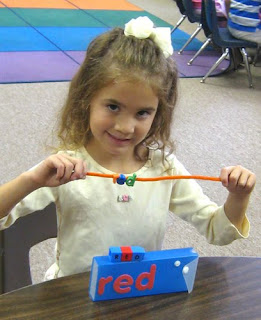 My kids LOVED sight word string-ups! I actually made a table on a paper, with the words that they were responsible for making written in each box. As they finished assembling a word, they were supposed to color in the box for that word. If I had a volunteer at the table, I had that person put a star in the corner of the box to verify that the word had been completed. Anyway, the thing that slows them down with the activity is trying to find the correct letter. If the letters are sorted into the pencil boxes, then they won’t encounter this problem. I’ll have to see if it is just too easy for some, but I think that it will be a more efficient use of their time. I will also put out some extra letters so that they can make their names or other words when they are done. My kids last year would work on this one table for several days, so it was a good center activity that lasted, especially when you throw in the accountability paper. 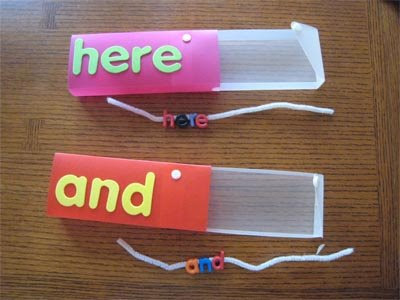 When I first bought the Sight Word String-Ups, I just bought the set. When I saw that it had only four trays, I put those away and got out carpet squares instead. Then I realized that for a group of five or six kids, we really could use another set. As I looked online, I realized that you can buy the letters separately, in either upper or lower case, and it is half the price! So I bought another set.  To buy the beads separately, look for the Lower Case Manuscript Beads by Roylco.  It’s much cheaper than buying the entire set, and it’s probably better than the set in most classroom situations anyway!

However, here is the link for the set of Sight Word String-Ups, if you would rather have the set.
www.reallygoodstuff.com
Amazon.com.