Sounding Out and Making New Words with the Sounds Fun Word Building Kit! 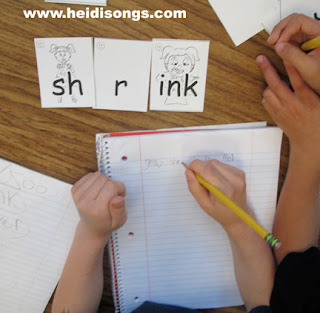 A child uses the Sounds Fun Word Building Kit to make a word and write it.


I’ve been waiting a long time for this kit, and I am super excited to be able to share it with you now!  I put this project on my wonderful husbands (very long) “to do list” a few months ago, and it finally made its way to the top of the list.  So I now finally have my wonderful Sounds Fun Word Building Kit!  I’m only sorry that there is so little time left in the year to make use of it. 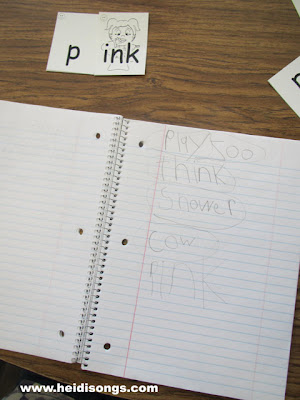 Children needed very little coaching to figure out that if they simply changed a beginning or ending sound, they could make an entirely new word with very little effort! 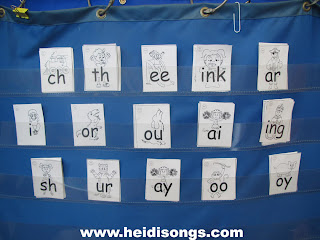 We found it easiest to put all of the Sounds Fun picture cards on the pocket chart. 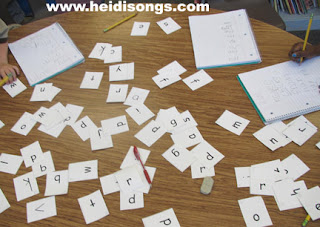 We scattered the plain letters on the table.


Then you can either provide the children with a list of words that you want them to work on building, or give them pictures of the words that you want them to build by using the flash cards from the Sounds Fun Workbooks.  Or, you could also simply let the children create the words of their choice by providing no word list or pictures at all.  However, holding the children accountable for making a certain amount of words and writing them down is a good idea for children that are working independently in centers. 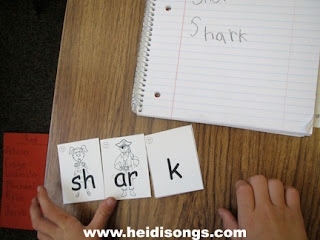 I had my students write their words down in their journals and try to read them back to a friend.  The kids did an awful lot of singing from the Sounds Fun CD and DVD while they were building their words!  It was really fun to watch them go!  The only problem that I had with the activity was that since I told the children that writing the words down was the goal, that I found that many children simply skipped the word building part and copied the words off of my list straight onto their journals and told me they were done! 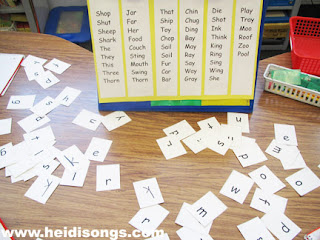 I started by giving the kids a list of words to try to build.  I removed it later; they did better without it.


Because this was happening, I decided to remove the word list and just told them to make as many words as they could with the cards and write them.  However, some children needed to have a minimum number of words to complete in order to be “finished,” so at that point, I designated a number for that.  Thankfully, my higher achieving students kept right on going as usual, trying to beat each other by being the one to make the most words anyway!  (It was, of course, the lower achieving students who were fixated on doing the least amount of work possible.)

One of my students tried to write the word, “ice cream!”


To avoid this kind of situation, it is probably best to give children the flash card pictures of the words from the Sounds Fun Workbooks and have them build the words that they see, but also let them know that they can build other words that they know with the cards when they are finished. 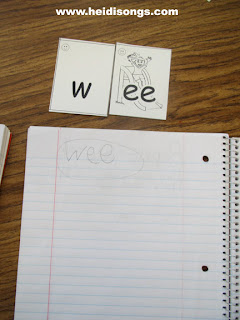 Often, building one word led to another!  The next word this child built was “week.”


The cards can also be used to teach children to sound out words, not only for making words of their own.  We played another game with the cards this week to try this that was really fun for everyone!  It’s called “The Queen Game” and it’s sort of a “teacher vs. kids” game.  In order to play this game, all you need is to tell the children that you are the queen (or king, if you are a male teacher!), and then draw a picture of yourself on a white board wearing a crown, and label it “queen.”  (I also wear a plastic tiara while I play this game!)  Then I draw a picture of a few kids on the white board and label it “kids.”  Then, just ask the children any questions that you want, and give the kids a point for any question answered correctly.  BUT… the queen gets a point for any question answered incorrectly, or if someone talks when it’s not their turn, or if any other rule is broken, etc.  In the end, the kids always win, and the queen is a bad sport, so she always cries!  The children find this hilarious, LOL! 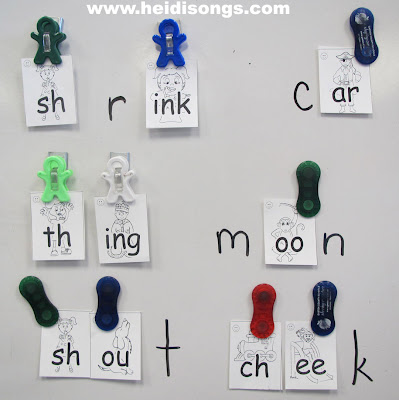 I used the Sounds Fun Kit cards and wrote letters on the white board with them for kids to sound out for the Queen Game.  Even my lower achieving students did quite well sounding out these tricky words!  Amazing!


The questions that I asked consisted of taking the cards and making words out of them.  Then I asked the children to sound out the words and read them to me.  I was absolutely AMAZED at their ability to sound out very difficult words, as long as the Sounds Fun picture cues were there!  I was SO pleased that I have to say that I am incredibly excited about these cards as a resource for kids that are just on the cusp of being ready to read harder words than just CVC words!  Even my lower students had very little trouble sounding out words such as “shout,” “cheek,” “thing,” and “book.”  All they had to do was say the sound that went with each of the Sounds Fun characters/letters, and say the plain letter sounds that were written on the white board with them, and blend them together.  I think that even the children themselves were surprised at how easy it was!  The picture cues with the letters embedded right into them provide a real crutch for those that need it.  If they know all of their letter sounds and Sounds Fun sounds, and have been taught to blend sounds together, then they can read these words.  Hooray!!! 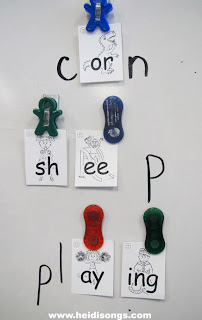 Even “tricky” words like this were decodable for my little ones, as long as the picture cues were there!


As far as other activities are concerned, I think that kids would also enjoy cutting and gluing down their words onto another paper to save them and take them home.  I think that they would probably also enjoy making word books out of them!  Hmmmm… the creative juices are flowing!  In any case, this kit definitely makes a nice, open ended phonics literacy center that would be meaningful to kids throughout the year, even if they never wrote any of those words down.

Some other extensions of this kit that come to mind are:
1.  Glue magnets onto the backs of the cards and have the children build words with them onto a magnetic white board, and then write the word directly underneath it.
2.  Paint shellac over the top of the pictures onto ceramic tiles and having the children build the words with the tiles.
3.  Making an art project and having the children label it with the cards and glue them down.
4.  Have the children glue down a word and illustrate it.
Can you think of any others ideas? 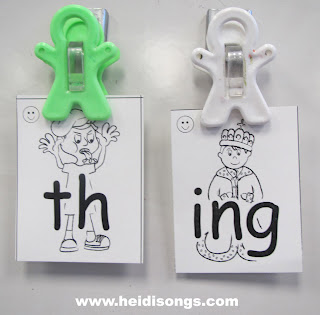