Spiders and Pumpkins and Bats, OH, MY!

What a BUSY WEEK!!!!  It was Red Ribbon Week and we had activities and assemblies, plus we are getting ready for Halloween.  AND we are also trying to get all of our testing done because we need to be ready to conference with parents beginning on the second week in November, so that means that the children’s report cards must be all done by then.  And in addition to that, I have to be observed doing our new “brain compatible direct instruction lesson” next week on Wednesday, Nov. 2nd.  Oh, and to make things even better, I have a sore throat and lost my voice on Sunday night, so I have been “speechless” since Monday.  But no stress or anything!!!!  (Ugh!  How many times have I asked those children to cover their mouths and not to cough right in my face????)
Okay, take a deep breathe, and just relax…. 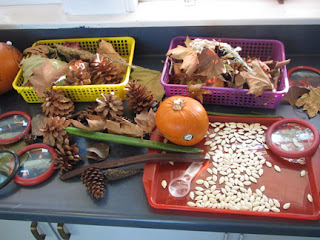 Also, as I mentioned last week, my kids are now experts at the number Eight Spelling Song, (from Sing and Spell Vol. Five:  Number Words and More Sight Words and our new, animated Number Jumble DVD) and are totally sure that spiders have eight legs, but insects have only six!  Not only that, they can REALLY boogie!  If you don’t believe me, just log on to youtube.com and watch this cute little video of them shaking their stuff; it’s super cute!!!

1.  A Question About the Sounds Fun Materials
This question came up via email, and I thought I would share both the question and answer with you here on the blog.  By the way, that Sounds Fun DVD is now finished and available! And we have a new Workbook coming very soon so watch for that as well.

Question:  I have found your Sounds Fun resource to be so resourceful and helpful.  I have shown it to several K and 1st grade teachers at my school.  They use a Literacy Link program that assigns a hand shape/motion with each letter of the alphabet.  It is very effective and Sounds Fun is the perfect extension.  The K teachers are hesitant to use it because they think it will confuse the kids who don’t even know their alphabet yet.  The 1st grade. teachers like it but want to only introduce the picture that goes with the sound they are teaching that week.  The kids I have used it with have no problem learning them all at one time like you show in your video.  Any words of advice as a reading specialist?

Answer:
I have tried it both ways- introducing one sound at a time, and introducing all of them at a time like I did this year and last.  The children don’t seem to have any problem with them either way, and even I am surprised at that!  But it just seems to me that when they are BEGGING to learn something,  you might as well teach it.  I still haven’t shown them what any of them are for, other than the “th” and the “sh” sound, since we have seen them in words like “she” and “the.”  We have also used the “Or Dinosaur” song to spell the word “or.”  But as we find the sounds in posters and books, etc., I am showing them how they relate to the poster and the song, and the light is going on.

The love the songs, and they are singing them constantly, even though I don’t ask them to!  They latch onto the most repetitive, catchy refrain and just keep singing it over and over and over again as they play until you want to scream at them!  I heard a child singing the other day as he was coloring, “O-R, or!  Just like a dinosaur!  O-R, or!  Just like a dinosaur!”  He must have sang that part of the song to himself twenty times, at least.

My response is this:  Children often don’t know that things are “hard” unless we tell them so!  This has been my constant observation over the years.  I have seen them sing songs that are “hard;”  catch on to concepts that are “hard” instantly, such as counting by two’s- just by feeding it to them via music and movement that they find entertaining and catchy.  (Consider the “Count by Two’s” Song on the Musical Math CD/DVD; it works like a charm.) The brain is a marvelous thing, and the brain in early childhood is an amazing sponge.  If you show them a picture (such as the Sounds Fun flash cards in the video) and it captures their attention, and they are begging to be taught about it- I say, DO IT!  Do it right away, as soon as you can, because that is the optimal moment of teaching!  Their attention is MOST focused at that very moment.  You can wait for another time, but then you will need to artificially recreate that focus, which is harder.
I have also worried about confusion regarding the other letter sounds, but I have not seen it happen, and I do work in a Title One school with low kids.  So far, as long as I leave the picture/icon attached to the letter combinations, they have not become confused.  But then I am also teaching the words with those digraphs as sight words with songs of their own, such as the “the” song, and the “she” song.  So they have two different ways to approach that word.  They can try to sound it out with the Sounds Fun tool, or they can learn it as a sight word with the song as a tool.  Most of the young children use the song and the shape of the word, I think.  Later, when phonics starts to make more sense to them, the phonetic element starts to kick in as a tool.  So that’s how I see it, as a reading specialist.

2.   Science:  Delving Deeper Into Pumpkins!
On Wednesday this week, we said good-bye to our tarantula visitor “Spanky the Spider,” and so I decided to focus more deeply on pumpkins.  We did an experiment to see if a pumpkin would sink or float, and I had the children graph what their predictions would be.  Then I filled big, clear storage tub with water, and I put some pumpkins in it one at a time.  First I put in a large pumpkin, and then when we saw that it floated, I put in a small one and finally a medium sized pumpkin.  Each one floated, and then we talked about why we thought that was the case.  None of the children came up with the idea that there was air inside of it, so I got a couple of balls and put them in the water, too.  Then I asked again why the balls floated.  The children still could not guess it, so I told them that there was air inside the balls, and that there was air in the pumpkins, too! 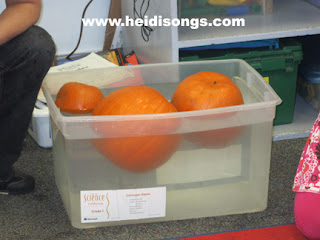 Will a pumpkin sink or float?

After that, each of the four groups got to carve a pumpkin and scoop out the pulp. This, of course, was wildly exciting!  I took the seeds home and toasted most of them, and then the next day we sampled them and graphed whether or not we liked them.  Amazingly, EVERYONE liked the toasted pumpkin seeds!!!!   Then I put the out the other raw pumpkin seeds that I did not toast for them to touch and explore in the science center.  They kept wanting to eat the raw seeds, too, those silly kids!  I am hoping to try the Oozing Pumpkin experiment that I saw on the Steve Spengler Science Website soon.  Fun!

3.  Halloween Color Words Worksheet (And Guided Drawing, too!)
I was really hoping to squeeze in another guided drawing lesson for the holiday, and so I tried to work a design out at home before I tried to give the lesson at school.  I realized that all I really had to do was put my existing Halloween drawings down on a paper together and make a picture out of them.  And then “it” happened:  I caught a cold and lost my voice, so by Tuesday morning, I was struggling for something to give my kids with a Halloween theme that would keep them happy at my reading table but would not require me to speak.  So I quickly added some color words to the pictures I had put down on the paper, and voilá!  My Halloween color word worksheet was done!  It did the trick, too.  I was able to sit and monitor their work and say very little while they did it, thank goodness!  Click here for the free download of this worksheet. 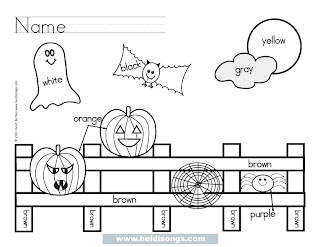 After lunch, I taught the children how to draw that very same drawing, too!  It was fairly successful, but not as successful as the “No, David!” project we did last week.  I think that the reason for this is because I did not think about reminding them to turn their papers to the landscape orientation rather than the horizontal orientation.  I had my example up in front of them and it was turned the correct direction and so I assumed that they would turn theirs that way, too, but NOOOOO!  (Duh!)  Just as soon as I told them to draw their first line, I realized my mistake, but it was too late.  Once again, it always seems just a little bit easier if the first part of the drawing has been started for them.  If I could do it again, I think I would give them a paper with just the fence drawn on ahead of time, or maybe one line of each part of the fence already traced on, etc.  THEN we could be sure that they would start with their papers turned the correct direction, and then there would be room for all of the pumpkins and spiders and cats and things, etc., on their papers.  Getting started right sure makes a difference! 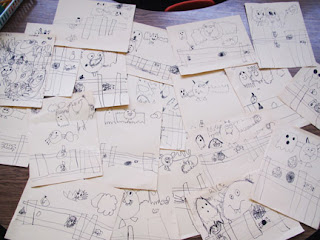 As you can see, some of them turned out better than others.

So on the free download of the Halloween Guided Drawing, I included a master with a traceable fence for those of you that would like to do it that way.  That’s the way I’m going to do it NEXT time, that’s for sure!  Hopefully, it won’t be too late for you to use these resources, perhaps even as a follow-up activity.  Otherwise, save them for next year!