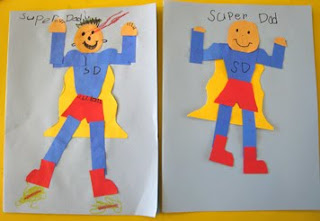 My class has been so “into” that Zero the Hero song and super heroes in general this year that I thought that it would be fun to make a Zero the Hero project!  But what we really needed was to make a Father’s Day card!  The solution?  I decided to create a Super Dad Father’s Day card!  So I decided to check out the picture that I had taken with Zero the Hero at the last Kindergarten conference that I attended, and model the picture after that.  Then I wrote “SD” on the shirt and had the kids write, “Super Dad” on the top of the card!  On the inside, we wrote, “Dear Dad, You are my hero!  Love, ____.”  I also had the kids write a letter to their dad, telling him what they would like to thank him for.  The cards turned out “super” cute! 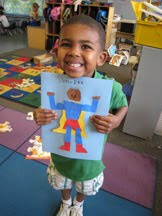 One thing I did to make it a little easier was to have parents draw a little “x” where the head should be glued.  The head must be glued down first in the right place, or the children will not be able to complete the project at all, because there has to be room for the rest of the body.  The only other thing that proved difficult was getting them to put the narrow part of the body (the waist) towards the bottom and the broad shoulders towards the top.  They kept wanting to reverse it.  Excluding this, the rest of the project was not hard at all!  The children immediately recognized the super hero as Zero the Hero, but were very excited to turn him into a picture of their dad.   For the hands and the head, I offered both light and dark skin to accommodate the different families that we have in our class, so that the super heroes would better honor and resemble the childrens’ real fathers. 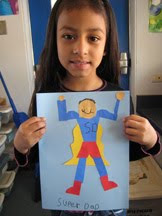 To prepare this project, we had parents pretrace the muscled part of the arms, the cape, and the boots.  Next year, I think that I will make a master and just run those pieces off on the copy machine, because that was a lot of tracing!  The rest of the pieces were just cut to the correct size square or rectangle.  The children had to trim the corners of the squares for the head and the hands in order to turn the squares into circles.  It was lots of fun, and the children were incredibly excited!  They can’t wait to give the card to their fathers! 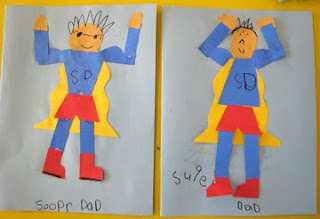