This week I am going to give you a great new resource that I call Syllable Pockets!  There’s also flash cards for whole group practice, and a worksheet that I used for homework practice, too!  It’s a pretty nice freebie set, and I hope that you like it!  I also have some tips to give you to help kids learn how to count out the number of syllables in a word.

Why Are Syllables Important?
First of all, pronouncing and counting syllables is part of the Common Core and it falls under Kinder in the phonemic awareness section.  Therefore, it is a skill that all children should have mastered as they move forward through the grades.

When children are trying to write, read, or sound out a word, a great strategy is to take it one section (or syllable) at a time.  When small children try to write phonetically (write words as they sound,) they are less likely to miss sounds if they take it one syllable of the word at a time.  Once I show my students how to do this, they get much better at writing longer words as they sound.
Later, when the children come to multisyllabic words that they are trying to decode (read) or spell with real spellings, they already realize that a great strategy is to break it down by syllables and take it one chunk at a time.  When learning to spell a long word, it is often helpful to have a child read each syllable of the word back as he or she wrote it to see if any are missing.  Once the child can accurately decode and read each syllable of the word- and write it- then he or she can also be taught where to separate the word if it needs to be hyphenated (broken apart) at the end of a line. 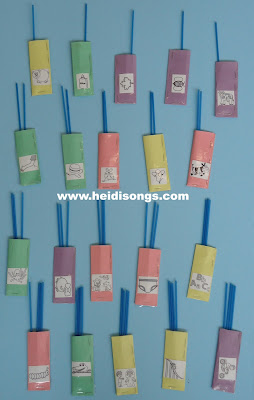 So here is how what you do with the syllable pockets.  It is very simple.  The children first learn how to count the syllables in a word by practicing on flash cards in a large or small group lesson.

These are the small flash cards that you can send home for homework, or cut up for the pockets.  They are included in large and small sizes.

Then, as a guided practice or literacy center activity, they practice this skill by putting a coffee stirrer into the pocket for each syllable that they counted in the word.  That’s all there is to it!

I used colored file folders to make the pockets, cutting them down to about 4″ by 2.5″ each.  Then I  stapled them closed, making sure that I stapled them so that they would stay open at the top a little bit, rather than totally flat.  You may also want to put more than one staple on the bottom of the pocket, because my kids were constantly pushing the coffee stirrers that I was using all the way down through the small hole in the bottom!  Then I glued one of the small flash cards down onto the bottom of the pocket.  I covered the pockets with clear packing tape to make them sturdier.  As you can see from the photo, they have already had a bit of use!  The children really like them. 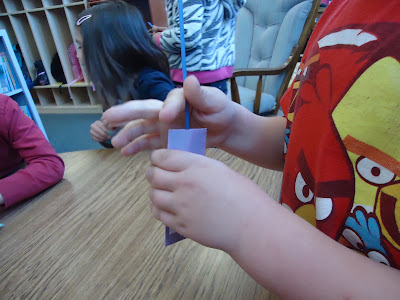 The children didn’t even need to be shown how to squeeze the pocket to get the straw inside it.

You can make them self checking if you want to, by putting the correct number of syllables on the back of the pocket, but I chose to skip that this time.  Instead, we sorted the flash cards by syllable and then put them on the pocket chart.  That is how they were able to check their work. 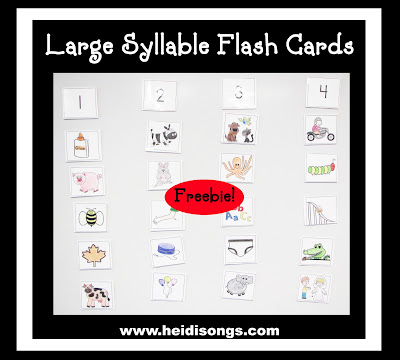 The teacher next door to me colored the flash cards I gave her and put magnets on the back!

The 24 flash cards are enough to make 24 pockets.  But that’s just not enough for a group of seven children to use all at the same time!  Unfortunately, we had some “hoarding” of straws and pockets during the first group because they were having trouble sharing our limited resources. 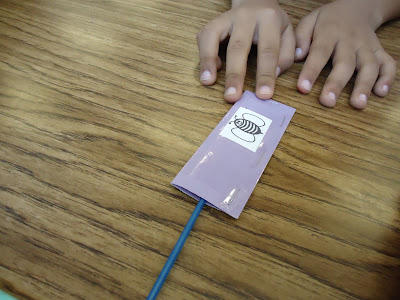 This “one at a time” method worked MUCH better to manage such a large group “small group” of children!

So during the second group, I held the pocket in my hand and called on each child one at a time.  I had him or her count the syllables for me, and then I handed that child the pocket and a bunch of straws.  Then that child counted out the correct number of straws and inserted them into the pocket.  That worked much better! 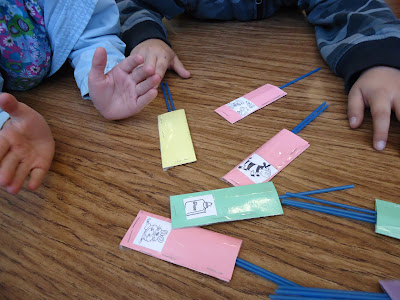 We probably should have done this activity before the worksheet went home, but since I was out of town at the conference, that’s not how it worked out.  I discovered that several of the children’s parents could not figure out what the pictures were, and had not noticed the picture key at the bottom of the worksheet.  Once I explained what each picture was, though, everybody understood. 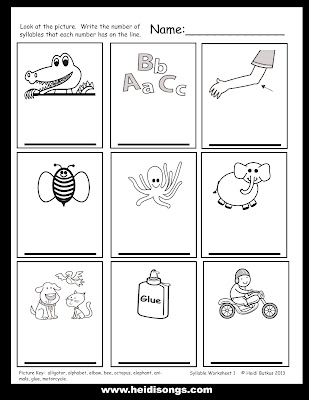 This is the worksheet that I sent home for homework.  The kids had to write the number of syllables below each picture.

You can download this little gem of a freebie here!  I sent home the worksheet that is included in the for homework, rather than spend precious class time on it.

And now for the hard part- teaching kids to count the number of syllables in a word:
The most difficult part of teaching kids to count syllables is getting them to NOT segment the word instead (In other words, if there are any folks out there that are not familiar with the word “segment” as it is used in the education world, kids often try to pull the word apart and say all of the sounds that they hear in the word instead of counting the syllables.) 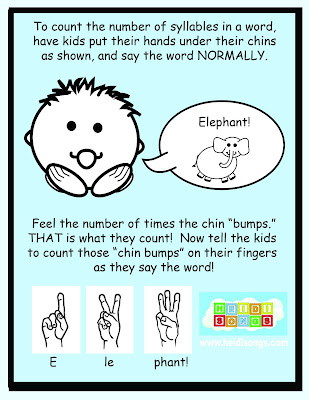 Here is the method that I use that has given me the greatest success in teaching children to count the number of syllables in a word:

1.  I teach the children to rest their chin on their hands and say the word normally.  The key is that they must say the word in the regular way, and NOT stretch out the word.  This identifies for the child what it is they need to count.

2.  If they don’t understand what you mean by saying it normally, then model it for them, and have other children that do understand model it also.  Then have them do it with you a few times.  Then see if they can say the word normally with their chins on their hands alone.

3.  Then they often will need to say the word again and put one finger out for each syllable that they say.  This helps them count it out without a mathematical error ALSO getting in the way, since some kids cannot count what they hear correctly without their fingers!  They need counters or something concrete to count as they say the word, or you will have kids that can identify the syllables in a word, but cannot count them correctly because they cannot see or feel them.  Syllables are abstract, and that’s why they are hard for little ones to count.

4.  Other things to try would include having kids push a chip up for each syllable that they hear.  But, they will still have to first identify what a syllable is, as opposed to a phoneme (the smallest unit of sound in a language.)  And THAT’s really what is at issue here!

5.  There is a song on our CD/DVD called Little Songs for Language Arts for syllable counting.  The lyrics are as follows:

When we practice, I sing this song with the kids, and then I start calling out names (or words) and then we all clap out the syllables in the child’s name or word that I said.  They LOVE this game, and it is a fun way to practice!  Enjoy!

Now here is another video from our video contest!  We hope you are enjoying viewing all of these wonderful entries!  Have a great weekend!

I hope you enjoyed this blog post!  If you did, sign up for our email updates!  You can also follow this blog on Bloglovin’, and keep in touch with me on Pinterest, Facebook, Twitter, TPT, Google+ and YouTube, too!  And, join more than 10,000 subscribers of our email newsletter for updates on products, Heidi’s workshops, valuable information, freebies, and PROMO codes you won’t find anywhere else!