Teaching Kids to Count to 100 Counting to 100 is a tough skill for many little ones, but it is one that they are expected to master in the Common Core Standards for Kindergarten!  In my district, we have been expected to teach the children to do this now for many years, so this is nothing new, thankfully!  I am now down to about eight students (out of 23) that are still unable to count to 100 successfully without assistance. As I have attempted to get them to master this skill, I decided to keep track of the different things that I have done to help them and share these things with you here today. 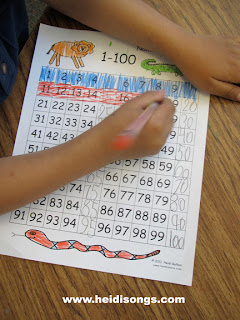 Obviously, counting to 100 involves recognizing the hundred’s chart as one giant pattern!  And I think that a lack of solid patterning skills (and probably some general readiness issues) are what is holding back some of the children in my class from reaching this milestone.  Children also need to practice this skill with an adult in a one-on-one situation, and if parents at home forget to do this, then that can also slow things down.  So the first thing that I did was test each of the children individually to see how far they could count.  Then I sent a note home to let parents know how far their children were able to count, and asking them for some help with this.  If you would like a free download of this note in both English and Spanish, please click here. 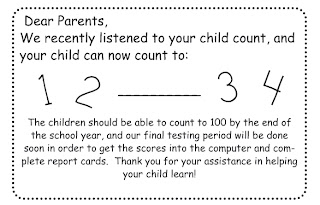 After that, I kept the list of children’s names handy that were still struggling with counting to 100, and gave this list to a volunteer each time one dropped in.  I gave each volunteer a hundred’s chart to show the children as they were counting, so that they could see the pattern themselves close up.  The children were pulled for extra practice in this area by my volunteers and university observers. Then, at our math table one day, I had the children fill in the missing squares on a hundreds chart that I made that had blank spaces in the five’s and ten’s columns.  Over the next few days, the volunteers pulled those children that were struggling and had them try to count to 100 again while reading their charts,

After that, I had them color in the charts, using one color for the twenties, another color for the thirties, and so on. This is how I did it:  I told them to find the row with a certain number (like the row in which all of the numbers started with a three.)  I asked them to identify that row (the thirties row) and then color all of them blue.  We did that same thing for each of the rows, coloring each of them different colors.  So my objective was for them to just NOTICE where each row was, and to notice that each row all started with the same number.  And after that, the goal was to identify that row as being the row of the twenties, thirties, forties, or fifties, etc.  For a free download of this chart, please click here.

One thing that I have done each year is put some large beads on a shoelace and write the numbers on the beads from 10-100, counting by tens.  Then, I teach the children to slide one bead over each time they finish a set of ten and move on to a new set.  I think it kind of gives them a visual representation of the pattern that they are trying to give when counting to 100. 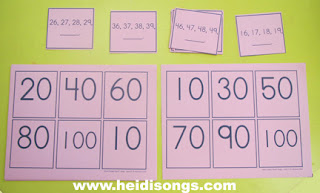 What Comes Next? Bingo Game


I also made a “What Comes Next?” bingo game!  The caller reads a series of numbers, such as “36, 37, 38, 39…..” and then the children call out, “40!” (hopefully, anyway!) and then look for number 40 on their bingo boards and cover it up.  The game is definitely a hit!  This game is included in a $4 download called What Number Comes Next? Game Bundle!  It goes along nicely with the “What Comes Next? song on the Musical Math CD/DVD, and the “Boing!” game on the Musical Math Resource CD or the individual download with that game on it.

Of course, we have been singing the 1-100 counting song from the Number Jumble DVD and the Jumpin’ Numbers and Shakin’ Shapes CD!  Here is a video of one class from our video contest singing that song.  (The song is also on the Musical Math CD and DVD.) The “What Comes Next?” song on the Musical Math CD is also helpful in getting kids past the “nines” and on to the next group of ten.  (Example:  29, 30;  39, 40;  49-50, etc.) 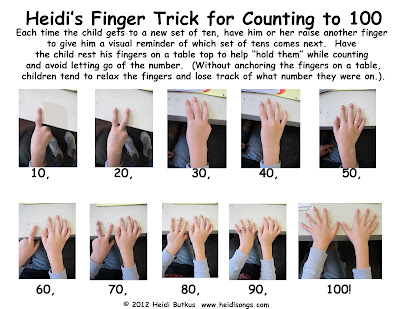 Once they can see that they had four fingers raised while they were on the forties, and then they had five fingers raised for the fifties, things start to make a little more sense to them- sometimes!  In the end, the children that are ready to understand this big pattern usually get it, and those that are not, simply do not!  Right now, I still have four children out of 23 that are still struggling with comprehending it, even after all of the interventions that I have done.  Of course, there is no way of knowing how much help these children are getting at home with this particular skill, and the extra practice certainly does matter!  If I could figure out a foolproof way to get parents to practice all of these difficult skills with their children, I guess I would be a hero!

Of course, a little old fashioned motivation never hurts!  Yesterday, I was testing a child that I was confident could really count all the way to 100, after all of the extra practice we had done.  But I had to pull him for testing during playtime!  Of COURSE he doesn’t want to do this during PLAYTIME!!!!  He got all the way to 79, and started to complain.  “I don’t want to!  I want to play!  I can’t do it”  I reassured him that I knew that he could do it, but he just kept on whining that he could not.  I told him that I was not going to let him go play until he at least attempted to tell the number that came next, but he still just sat there.  Then I had a brainstorm:  I whispered in his ear, “Hey!  If you count all the way to 100 for me, I’ll give you a prize out of the prize box!”  His eyes lit up.  “Really?  Right now????”  I assured him that I would let him chose a prize today, if he did it for me.  He INSTANTLY began counting at top speed, “80, 81, 82, 83, 84, 85….” all the way up to 100!  I wanted to dance and scream all at the same time, LOL!  He got his prize, and ran off to play.