Welcome to week #5! Here’s what’s working for me.

1.  “Señor Same Sound: The Sound Eating Snake Puppet”
Last spring, I had this idea for a puppet that the children could actually feed objects to, and so I began to search for puppets online that could do just that.  Unfortunately, I only was able to locate one very expensive shark puppet that could actually swallow anything!  So I thought I would make my own snake puppet out of a sock, and just make a large button hole with my sewing machine for the mouth.

I went to a local T-Shirt Mart to find a cheap and colorful pair of socks.  But while I was there, I found a great variety of very colorful leg warmers, instead!  I pulled one leg warmer out of the pack in the store and inserted my hand into it.  Then I stuffed one of the end of the leg warmers inside my hand as you would do with any sock puppet to make him talk.  The only difference was that instead of a closed hole inside the mouth, I had an open hole inside the mouth- which was absolutely perfect!  My snake would be able to swallow a small object, and I wouldn’t have to sew a button hole in a sock to make it happen!

So I bought one pair of striped leg warmers for $2.99, and rounded up a pair of the largest, most obnoxious looking buttons I could find in the button sorting box in my classroom for the eyes.  But the eyes really needed something more, so I bought some large “wiggly” eyes at Michael’s and glued them on with a hot glue gun.  Then I found a scrap of red felt and cut out a nice long tongue that could hang out of its mouth and sewed it on by hand.  My snake puppet was just about done!  But I really wanted him to be longer, and I had a whole extra leg warmer left over.  So I decided to combine the two leg warmers to make one long one.  I cut the cuff off of one end of both leg warmers, and then hand-sewed them together, but just halfway around.  That way, the second half of the snake could just hang down under my elbow.

This really worked out great!  The snake puppet was really taking shape.  But it just needed a little something more…. what could it be?  I still had the cuffs leftover, so I decided to sew them onto the snake’s head and call them a hat!  At the point when I had that brain storm, the recess bell was about to ring.  I had a University of La Verne student doing some observation and field work in my room, so I handed her the needle and thread, and asked her if she could turn the cuffs into a hat- and she did!  Just check out that picture!  (We added the plastic flower later.)  “Señor Same Sound” is an extremely popular teaching tool now amongst the Kindergarten teachers at my school!

This is how we use him:
*  Gather up some small toys that begin with the sounds that you want to work on.  We happened to have a very old set of sound sorting toys from an old reading series.  They are made of plastic, and the largest one is about three inches long, and they worked fine.  As long as you can push the toy down the puppet’s mouth, it’s fine.
*  I decided to begin by working on four sounds at once, but you may wish to start with more or fewer sounds.  So we had about five toys that started with the letter T, five that started with S, five that started with D, and five that began with M.  I found four plastic baskets and put some letter cards in them, and had the kids start by sorting the objects by sound and putting them into the correct baskets.  After that, I dumped out the objects onto the table again and had the children pick two that they thought started with the same sound.
*  Then the children took turns feeding their objects to the snake!  If the objects did not start with the same sound, then I articulated the words carefully, and had the children look at my mouth while I was making the beginning sounds.  (Sometimes, having the children look in a small mirror while they make the sound helps, too, because they can see that their mouths are doing something different.)  Then I did the Zoo-Phonics motion while making that sound, and had them make the sounds back at me while making the motions.  When they can feel their bodies doing different movements, they usually understand that the words begin with different sounds.  It’s a matter of using the movement of their bodies to train their ears- and it makes a huge difference!

2.  Criss Cross Applesauce!
This year, my kids seemed to respond well to little chants and rhymes that they could join into for classroom management cues, rather than me just telling them to sit flat and listen.  Once I discovered this tendency, the rest was easy!  This is what I came up with one day off the top of my head while I was teaching to get them into the “Ready Position:”

We have been using it every day since!  There is no melody here; it is just a chant.   I start off saying it in a nice loud voice, and then the children start joining in.  We all keep saying it more and more quietly until we are down to a whisper.  Hopefully, by the time we get down to a whisper, I have all of the children’s attention and they are all ready to listen.  (Not that it always happens that way!)  Sometimes we get down to a whisper and there are still three kids having a rowdy old conversation up on their knees, while paying no attention to the teacher at all!  But hey, I just keep trying…. 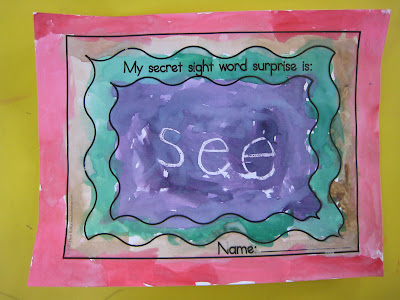 I came up with this idea after reading Vanessa Levin’s Pre-K Pages blog entry a few weeks back.  She mentioned that a fun activity to do with the children’s names is to write them with white crayon on white paper, and have them watercolor the paper to make the names appear, as in a watercolor resist.  I thought I might tweak that idea a little bit and turn it into a sight word activity.

So I decided to make a special sheet for it with a border that they might enjoy painting, write a title on it, and call it the “Secret Sight Word Surprise!”  (This page has been included as a free download for you this week!)

Then I ran off enough for each child to make two, and had some volunteers write four different sight words onto the papers.  (I actually wrote the words myself with a fat black marker and asked them to place the kids’ papers on top of mine and trace the words for the children with a white crayon, because I wanted the letters to be all formed “teacher style,” etc.)  I also had them add a small penciled in number one, two, three, or four in the corner of the papers, so that we would know what word was written on each one.  That way, when a child was ready to do a second paper, it would be easy to make sure that he or she got a paper with a different word on it.  (But as it turned out, only a few of the children had enough time to complete two of them in the 20 minutes that they had, so we could have prepared fewer papers.)

When they had a chance to paint their Secret Sight Word Surprises, the children were amazed and excited to see the words come up, and the room was filled with cries of “Wow!!!” and “Whoa!!!”   The kids really wanted to know how I did it, but I just told them that it was “magic.”  Maybe I should have let them in on the secret, but I thought it might take the fun out of doing this activity again sometime!  The next morning, I took all of the papers and had the class read through the whole stack.  We have only learned the words “I,” “see,” “the,” and “like,” (in addition to the color words) so this was great practice for them.  Plus, they also enjoyed looking at each others’ paintings. 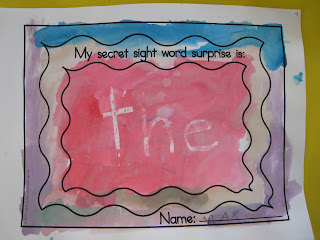 For more great classroom management ideas check out our posters, storybooks and songs!