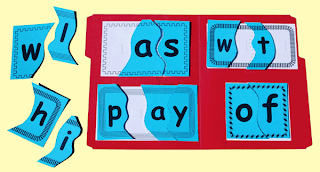 I finally found the time to follow through with my idea to create a different way for the kids to put together the spelling puzzles!  I wanted to create a board that the kids could fit the puzzle onto as they put it together, just as they would if you bought a board puzzle at the store or in a catalog, but minus the hefty price tag or storage issues.  I also wanted the pieces to stay put after they are placed, so I thought I would use velcro again to make that happen.

So I asked my husband to print me out the frames and outlines of the puzzles without the letters on them, which of course he did for me because he is so nice and supportive.

Then, I tried to glue these blank puzzle boards down onto some colored file folders that I had left over from the last velcro book project that I put together. But, some of the words have four letters, and they weren’t fitting onto the folders because they were too large, so my husband went back and sized them down for me so that they wouldn’t be any longer than the three letter words, and then printed them again.  Once I had the blank puzzle boards glued onto the file folders, I laminated them at school and had a volunteer trim them for me.  I printed out a new set of sight word puzzles on more left over colored paper, laminated them, and rounded up the remaining velcro.  Now I was ready to put on the velcro and see how it all came together!  But… oops!  I quickly discovered a few mistakes.  Naturally, I only discovered these mistakes AFTER I laminated and put on the velcro.  I thought that I had been extremely careful to place those blank puzzle boards right side up, matching them to the printed puzzles with the letters on them.  But on three of the eight file folders, there was one board that I had glued down and laminated upside down in relationship to the others!  This meant that I had to start over and redo those three folders.  SO…., in order to prevent this from happening to any of YOU, I convinced my husband to add a little arrow pointing up to the bottom right corner of the blank puzzle boards to help you glue it in correctly on the first try.  This also might save you the price of some of your supplies, since I wasted the last of my velcro and file folders (at least the nicer colors, anyway!) on the spoiled puzzle boards that wound up upside down.  I did go back and draw a little happy face on one corner of the file folders, so that the children would know which side was up when they started, because with the blanks, you just can’t tell when all the pieces are off.  A sticker would have been even better if I had put it on before I had laminated.  I also would have typed up the words that go on the puzzles and put them somewhere on the file folders before laminating also, just as an additional hint, and to keep the different puzzle clues and environmental print coming at them. 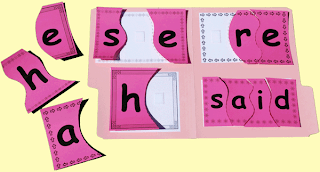 In any case, I really like the way that they turned out!  They are much better than just the loose puzzle pieces for a few reasons.  First of all, they are automatically sorted into groups of just four words for each file folder.  That means that there are fewer pieces to choose from and the task is not as overwhelming as a box full of 40 different puzzle pieces.  The fact that there is a blank puzzle board gives the children another clue to use when they are putting the puzzle together, and also helps develop visual perception as they try to match the shape of the puzzle piece to the shape of the board, as well as the pattern on its frame.  The whole thing is more fun and satisfying for the children to put together, because the pieces stay put once in place.  This allows the children to put four words together, and proudly say, “I did it!” and then bring the whole thing over to me to read the words without spilling any of the pieces.  All of these clues help some of kids that are a bit slower to put together puzzles by giving them a few more hints on how to fit the words together.  It also helps me keep the puzzles organized and helps prevent losing any pieces, because when we are done putting them together, I can quickly look at those puzzles and immediately see if some pieces are missing.  I used different colored paper for each folder’s puzzles for that purpose.  I also did tape a laminated manilla envelope onto the back of the file folder so that if someone is not done with a puzzle and we have to stop, the pieces can be quickly stuffed into the envelope.  This means that I don’t have to go back later and put the whole thing together after school just to put it away.  And, I like the fact that I have a way to replace a missing piece by xeroxing and laminating it, rather than throwing the entire puzzle away because a piece is missing, or letting the children just use it with one piece missing.  You can ‘t do that with a commercially produced puzzle.

If you already bought the spelling puzzles and would like an update with the blank puzzle pieces, just let me know in an email with the exact name that you ordered under (that’s important, or I won’t be able to find it!) and the month that you bought them, if you can remember.  I’ll verify that you bought them and email you the updated file.  Happy teaching!