What’s working in my classroom this year

This has been a very challenging school year for me, as I have a class with quite a few discipline problems (7 out of 21!), and the majority (about 75%) came to Kindergarten not knowing the alphabet or numbers. Usually, I have three or four discipline problems at the most, and about half of my students know the alphabet when they begin school. Not this year! Here are some things that I have done that have seemed to really helped them learn.

Using the Singable Songs for Letters and Sounds CD, I introduced one letter song per day for the first month of school until we knew all of the songs. I always hold the letter card in my hand when we sing, and then shout out “What’s that letter?” after each song is over. We continually review all of the songs, of course. Most of my class now knows all of the letters(!), except for the lowest of the low. I have seven this year that I consider to be VERY low. Two of those low kids now know most of the letters (though not all), and three know about half of the letters. The other two kids are going no where fast, no matter how many times a day they get pulled individually to work on it with myself or with volunteers, and despite having after school tutoring in a group of five for an hour three times a week. I do think that those two will eventually qualify for special services. So I think that the songs are helping. (This is the first school year that I have had them from the start of the year.) I do hear them singing the songs to themselves to help figure out a letter that they don’t know. They recognize it from the song, and start singing. Eventually they come to the letter name in the words to the song.

Another thing that is helping is having the kids form the letters out of Playdough, and then tell me the name of the letter. If they don’t know the name of the letter, then they have to make it again. I have a list of letters that each child is working on, so I make them form the letters on my list, not ones they already know. The easiest way to do it is to keep a ziplock bag with the letters each child is working on in a tub. Each baggie has the child’s name written on it. I pull out the bag and hand the letter card to that child, and ask him to form the letter. With my higher kids, I let them form any letter they want (assuming they already know them all.) As a side note, I also found it helpful to have the faster learners make the letters that are harder to draw out of playdough, too- like the K, or lower case E’s and G’s.

One more thing that is helping is Rapid Automatic Naming boards. If you have never heard of these, “RAN” boards are simply grids with letters (or numbers, words, whatever) in them that each kid needs to work on. 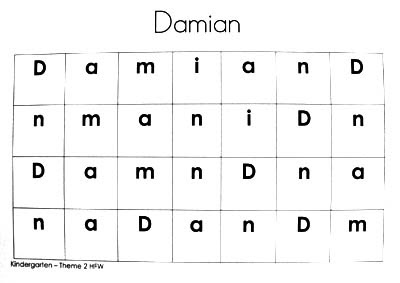 I started with my low kids’ letters of their names in this grid, and had them continually point and say those letters only. We worked on each one until they started to get them. So Angel is only working on A-N-G-E-L until he gets them; then we’ll add more. I taught him to spell his name aloud, pointing to some plastic letters that he would put in order for me. Then, when working on the RAN board, when he came to a letter that he forgot, he would point and spell his name aloud until he figured it out. It’s slow, but at least he is experiencing some success. I put the letters from their names in little pencil boxes that I found at Staples for a penny each in August, along with their names printed out and taped to the top of the box. That way, we always have the plastic letters from their names ready to go. It is tough to manage this activity any other way than one-on-one, so I prepared a coloring sheet for the kids to do in my small group, and worked with the kids that needed it one at a time. I skipped the kids that did not need this type of help, or helped them with word flashcards, etc. I also did it in after school tutoring. In this case, I let the others play while I worked with just one child at a time. (Click here for some good samples)

I also found it helpful to print out each child’s name in large print on index paper, and have the kids cut them apart and sort them by letter. I taped a paper with each letter on it to the wall. Each time they cut off a letter, I tried to ask each one what letter it was. Then they glued the A to the A paper, etc. We did this with names and with color words, to try to focus strictly on the words and letters that were meaningful to each child. For my faster learners, I let them cut apart the letters from anyone’s name that they wanted, and encouraged them to try to read that name. They loved it! I think that I will try to do the same thing with words, and have them sort the words by color, sight word, or names of students. My kids LOVE this activity, and it is easy to manage to do it more than one child at a time, thankfully!