Guided drawing is a GREAT whole group activity, and can easily keep a group of four and five year olds happily engaged for a good 20 minutes at the beginning of the year and even up to 30 minutes by the end of Kindergarten!
What you need:
An easel, some simple drawings to copy, paper, black fine tip markers or crayons, and a place for everyone to work where they can easily see you while they draw.  I save a sample of each year’s lesson and refer back to it to help me remember what I drew and how I drew it.  I have the kids sit on the floor and use large pieces of cardboard to write on.  We do seasonal drawings and drawings of things that we were learning about.

The trick to guided drawing is to relate what you are drawing to a shape they already know how to make. 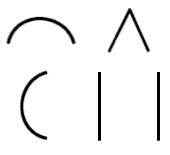 *  A pointed top can be like a “capital A without a line in it.”

I try to use the letters and numbers that the children already know to reference  shapes that the children can use in their drawings.  This also turns your guided drawing lesson into something of an alphabet or number review, if you keep mentioning letter or number shapes as you draw.  You can kind of “stretch it” as much as you need to, in order to meet your required number of minutes in certain subjects, but also let the kids do something fun.

How to Draw David from David Shannon’s Book, “No, David!”

* Draw a circle for the head, big enough for the eyes, nose, and mouth.
* Make a letter C on each side of the head for ears.
* Draw two dots for the nostrils. Then put a triangle around it. The triangle is like the big A, with the line on the bottom.
* Draw two dots for the eyes. Make two lines going in for his eyebrows. Draw little lines on his head for hair. Make a big smile with a lid on it for the mouth. Add triangle teeth.
* Make a number 11 for the neck.
* Draw a circle tummy. Draw two lines going down for each leg. Put a “lid” on each pair of lines for the bottom of his pants.
* Draw circle shoes. Put a number eight on the shoes for shoe laces. Make a line above the shoes for the socks.
* Draw two lines going out for each arm. Put a lid on them. Make two circle hands. Put two lines on the arms for the sleeves of his striped shirt.
* Make two lines very close together on his tummy for the belt. Make a number 11 in the middle for the buckle. Now color in the belt with your black marker. Don’t color in the number 11. That’s the buckle.
* Make some lines on the shirt for the stripes. Don’t make more than 3-4 lines.

I know I mentioned this recently, but I am including this again since it is in my presentation on whole group activities.  Sounds Fun is a fun whole group activity that teaches letter combinations and their corresponding sounds, such as the /th/, /sh/, and /ch/ sounds.  The great thing is that it gets the kids up and moving, so it provides a “brain break” for those little wiggly ones that really need it!  I designed it to be a fun and active method of practicing the sounds of the digraphs and diphthongs. The movements and characters really helps kids remember! It works a lot like Zoo-Phonics.

1.  Show a flash card with a visual cue.
2.  Kids respond physically and verbally.
3.  Remove the visual cue and practice as before.

I also gave them practice reading words that fell into that word family group.  We did the motions while sounding them out.  I put a set of cards on the wall, but for some kids, they were too far away to see.  So I made up single sheets to put on the table.  We eventually made this into a poster, so that I could post the whole thing in one spot easily.

After working with them on it for about a month, I removed the character to see how they would do.  More than half of the class had memorized them easily, without any character on the card for prompting!  But the best thing about it was that it really gave the kids a way to express the written sounds that don’t fall into those basic 26 sounds that we always teach with the alphabet.  So they were able to write phonetically just about any word that they wanted to write without help, and then  were able to read their sentences back again.  It opened up a whole new world of writing possibilities for the children, and this in turn greatly influenced their ability to read and attack unknown words. 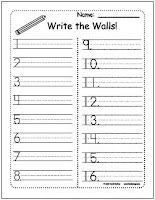 What you need:
Each child needs a clipboard or a book to write on, and a piece of paper.  Their job is to write as many words as they can and read them to somebody.  This can be done whole group, but I think it makes a great small group center for a group of kids that has to work alone for about 15 minutes.

They can usually do alright with it and be happy enough copying words down all by themselves. The kids really love this activity!  They always wanted to brag about how many words they had been able to write down.  It’s great if you can find the time to listen to them all read their papers.  I made a special “Write the Walls” paper for them, which I’ve included here as a free download for you!  There are two versions:  one has lined spaces for careful printing, and the other does not.  But the truth is that a blank sheet of paper will work just fine if you are limited in the number of copies you are allowed to make at your school, or if you are caught one day without a lesson fully prepared. 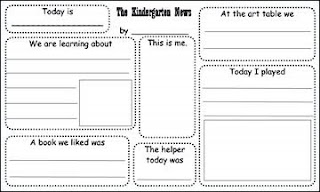 What you need:
A “newsletter” for the kids to fill in, a pencil and crayons for each child.  Mine was on 11” x 14” paper, but I have also included an 8.5 x 11 inch master for those of you that can’t print on the larger sized paper, or who would prefer a shorter project. Both masters have been included here for you as a free download!
What to do:
As you write in front of the children, have them watch you model filling one of these sheets out for several days.  We did a couple of them in small groups as well.  Once they had the idea, I passed it out to the whole group and they did great!  We did this activity during the last two or three months of Kindergarten, when they already had lots of basic skills.  This is a neat way to introduce journaling about what you did during the day.  Once the children understood how to do this little “newspaper,” they loved sitting together and talking about their day as they filled it out.  Even better was the opportunity to share their papers later!  Fun! 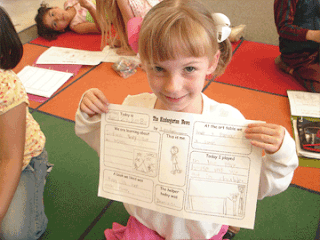